New species of parrot described from the Chatham Islands 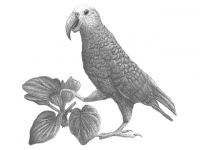 New Zealand officially has a new species of bird; unfortunately birdwatchers are unlikely to have much luck if they go looking for it, as it has already been extinct for several hundred years.

Analysis of fossil parrot bones from the Chatham Islands has confirmed that they represent a distinct species, which was once endemic to the island group. The research team have officially named the extinct parrot ‘Nestor chathamensis’ in the latest issue of the Zoological Journal of the Linnean Society.

Scientists first collected large parrot bones from the Chatham Islands in the late 19th Century. However, there has since been confusion about which species these bones represented, with suggestions they may have been from kea, kaka and even kakapo. The possibility that the bones could represent an undescribed species was first raised in the 1990s, although no one had followed up on this idea since. The new study, which included morphological examination and extracting ancient DNA from one of the bones, has confirmed that the species was distinct, yet most closely related to the New Zealand kaka.

“We suspect a lot of the previous confusion about the identity of the bones may have been due to the unusual proportions of the bird” said lead author Jamie Wood of Landcare Research.

“It would have looked superficially like a kaka, except its beak was halfway between the short beak of the kaka and the long beak of the kea. It also had large thigh bones and a broad pelvis, which suggests it spent a lot of time walking around on the ground.”

The DNA work, led by PhD student Kieren Mitchell at the Australian Centre for Ancient DNA, used a new method to fish out trace DNA from an ancient bone of the parrot. By comparing the DNA sequence from the Chatham Island bone with those of other parrots, the team estimate the Chatham Islands parrot originated from a kaka that flew to the Chatham Islands around 1.75 million years ago. This was probably not that long after the islands emerged above sea level.

Being large and terrestrial meant the Chatham Islands parrot was probably easy to hunt and, as was the case for similar animals on most islands around the world, it likely became extinct soon after the first human settlers arrived.