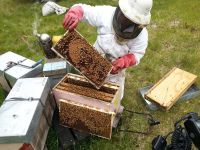 A national survey of beekeepers will provide a “starting point” to explore the potential causes behind colony losses in New Zealand.

Around the world, there are reports of high colony losses. In New Zealand, while hive numbers have significantly increased over recent years, there has also been a surge in unexplained colony losses. Diseases, pests, pesticides, starvation and overstocking have been blamed, but the evidence is largely anecdotal.

Now, industry groups and researchers are turning to beekeepers for their help to protect the $5.1 billion industry. Apiarists – from commercial to hobbyist – are being asked to take part in the country’s first colony loss and survival survey, which starts today.

The online survey, conducted by Landcare Research, will gather baseline information from beekeepers about colony loss and survival to track changes in the future.

“The data from the survey will allow policy makers, industry groups and beekeepers to make better decisions on how to preserve New Zealand’s bee populations,” Dr Brown said.

The survey adheres to international standards to allow for worldwide comparison. However, there are a number of questions that are specific to the New Zealand industry and conditions, he said.

Federated Farmers Bee Industry Group chairman John Hartnell said bees are critical to the country’s agricultural and horticultural industry and must be protected. Many crops rely on bee pollination, he said.

“Looking ahead, this survey will help the industry to form a framework for building a long-term picture of annual trends and explore the potential causes of losses and ways to prevent them.”

“The survey will provide a wealth of benchmark data that will facilitate apiary management,” Paul said.

To help raise awareness about the importance of bees, the NBA has declared September Bee Aware month.

If you’re a bee keeper and would like to take part in the survey go to: http://surveys.landcareresearch.co.nz/s3/NZCOLOSS