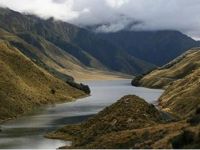 Dukes Tarn, one of the study sites

Land use intensification, expanding land-use, changing climatic conditions and increasing incidence of large fires are changing the composition and structure of forests worldwide, with some transitioning to savannah or grassland ecosystems. However, this is not a new phenomenon - for millennia, humans have effected forest transitions through their use of fire, and widespread rapid transitions in the past are often linked to expanding human settlements and cultivation.

New Zealand provides a prime example of a relatively recent and major prehistoric forest loss, and one of the fastest changes documented. When humans arrived c. 750 years ago, they instigated a period of deliberate burning that led to the loss of nearly 50% of New Zealand´s forests. Astonishingly, it appears this was caused by very few people - probably only a few hundred individuals in small transient groups - yet they were able to initiate widespread and permanent forest transitions to open vegetation.

Janet Wilmshurst, Jamie Wood, Matt McGlone (all at our Lincoln site) and their colleagues from Montana State University developed high-resolution reconstructions of vegetation (pollen) and fire (macroscopic charcoal) from radiocarbon dated lake-sediment records from two small, closed-basin lakes, Lake Kirkpatrick and Dukes Tarn. These two sites represent different vulnerabilities to human-set fires: one drier, lowland site obviously more susceptible to human-set fires and the other wetter, high-elevation site being much less burnable. At the drier site, the shift from forest to shrubland occurred within decades rather than centuries as previously believed.

Our native trees are inherently vulnerable to fires, which would have occurred only rarely in pre-human New Zealand.  Targeted, repeat-burning in highly-flammable recovering vegetation was sufficient to create an alternate fire-prone stable state (consisting of scrub, fern and grassland).

The rapid transitions that happened in New Zealand 750 years ago is a portend of what could be happening in other parts of the world, where forested regions are currently experiencing major anthropogenic disturbance. For example, alterations to fuel and microclimate conditions following logging activities in evergreen forests of the northwestern US have increased post-fire flammability, ultimately increasing fire severity such that forest recovery is delayed or non-existent. Similar ecosystem feedback has also been described in mountain ash forests in Victoria, Australia where logging activity results in an abundance of fine fuels, slash, and more flammable early-seral vegetation. While fire occurred in these forests in the past, it was typically infrequent, and eventually followed by conditions that promoted robust recruitment of mountain ash seedlings. In recent decades, the increase in fine fuels, slash and persistently drier microclimatic conditions following logging activity and subsequent increased fire activity interact to create these new fire-prone ‘landscape traps’.