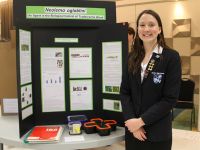 Aimee Leaming with her successful exhibit.

A secondary school student from Kerikeri scooped the 2016 Excellence Award at the Far North Science and Technology Fair for her study on one of the Brazilian beetles released in the region to control tradescantia (Tradescantia fluminensis). Aimee Leaming, who was also the dux of Kerikeri High School in 2016, investigated some of the factors that might influence the survival of the leaf beetle (Neolema ogloblini), also affectionately known as 'Shiny'. Aimee's hypothesis was that the beetles would feed at different rates under different light and temperature conditions.

Aimee firstly investigated the levels of light intensity found under forest canopies in New Zealand, where tradescantia is a problem, and then studied how that affects the distribution and amount of tradescantia eaten by the leaf beetle. Aimee designed a choice chamber test using different layers of shade cloth to create a range of light intensities between 150 and 3,450 lux to determine which light intensity they preferred, and under which light intensity they consumed the most leaf material. After a 24-hour period the number of beetles in each chamber was counted and the amount of leaf material eaten was measured. Her results suggested only a weak relationship between increasing light intensity and the number of beetles present, but more leaves were eaten under high-light (3,450 lux) than low-light conditions (150 lux).

Aimee was also interested in whether it was possible to reliably tell the difference between male and female beetles, as this would help researchers to release a good sex ratio of beetles in founding populations establishing in new habitats. Essentially, she needed to look for a phenotypic marker to identify beetle gender. By dissecting and measuring 32 beetles that ranged in length (measured from the top of the head to the base of the abdomen), she was able to show that females are slightly larger, with a median body length of 4.92 mm compared with males, whose median length was only 4.21 mm.

Aimee produced a comprehensive report on her study. In it she highlighted the importance of understanding the preferences of the beetles, given that New Zealand has such a highly variable environment, to allow the conditions where the beetles might have the greatest impact to be identified. Her results suggest that while the leaf beetle is probably ideally suited to the Northland climate, they may struggle in cooler parts of New Zealand. She also concluded that the beetles beetle length is a good indicator of gender when selecting beetles to be moved to new areas.

"What impressed us was that Aimee understood the importance of replicating the experiment to add certainty to her results and was very thorough with her experimental design", said entomologist Jenny Dymock, who helps the Northland Regional Council with weed biocontrol activities and also gave Aimee a helping hand with her study. Jenny added that Aimee's findings have made a great contribution to predicting the effectiveness of the beetles, and that the results are relevant to other countries interested in biocontrolling this weed.

Following her award, Aimee was invited to attend the Powering Potential convention in Wellington, which aims to bring together 40 of New Zealand's top secondary students to discuss solutions for climate change. This initiative is hosted by the Royal Society of New Zealand and is designed to provide a youth perspective on environmental impacts associated with global warming. Aimee was also invited to travel to the Taiwan International Science Fair (TISF) awards, which involve around 250 Taiwanese finalists and 40 overseas students from 20 nations around the world. Here Aimee won her category, placing first in Earth and Environmental Science.

Not only does Aimee have a great scientific mind, but she is also one of New Zealand's top gymnasts, winning her section at the 2016 National Secondary Schools Competition. She is planning to study Health Sciences at Otago University.

Congratulations Aimee, and we are sure that you will make a great contribution to New Zealand science whatever discipline you decide on!