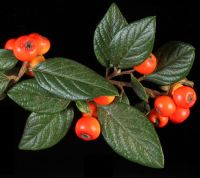 This Lucid 3 interactive key will help you to identify which Cotoneaster you have, of the 26 species currently known to be in New Zealand growing wild or in cultivation.

Cotoneaster is an ornamental shrub genus common in New Zealand gardens. None is native to New Zealand; most species have their wild origin in the Chinese Himalaya. Most species in the key are known from the wild, a number of species are troublesome weeds, and one is banned from sale (Cotoneaster simonsii). Cotoneasters are frost-hardy, some will grow under native forest canopy, and their fruit are spread by birds. These features make them invasive weeds in both native forest and scrub ecosystems and in non-native agricultural ecosystems.

The key uses features from leaves, flowers, and fruit to make identification through most months of the year possible. Each species is illustrated to show leaves, flowers, fruit, and pyrenes in detail. Factsheets will be added in the next 12 months. Cultivated species have been included in the key because since 1988, the number of naturalised and casual species in New Zealand has increased from 7 to 17 and is likely to increase further.

This key will run on most browsers, including Chrome, Firefox, IE and Microsoft Edge.

Although this key is not optimised for portable devices, it displays OK on tablets.

Dedicated smartphone apps are available for two of the keys on these webpages (Coprosma and Native orchids).