The enormous bones of moa, the giant extinct birds from New Zealand, have long fascinated scientists from across the world. The relatively recent extinction of moa, along with a suite of other herbivorous birds, means New Zealand has one of the most complete fossil records and best studied extinct faunas of anywhere on earth. However, relatively little is known about what these birds ate, or how their extinctions might have affected the structure and composition of the natural forests, shrublands, grasslands and herbfields of New Zealand. Understanding the lost ecological relationships between New Zealand’s extinct birds and the plants that evolved alongside them has important implications for modern conservation. 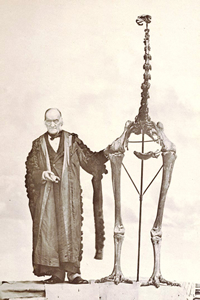 We aim to expand our understanding of these topics through a study comprising three main themes: