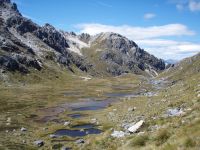 String mires are formed from distinctive string-pool and island patterning of mostly upland wetlands. They have slightly elevated ridges at right angles to the direction of water flow. They are formed by the interaction of topography, underlying substrate, hydrological and drainage properties, as well as differential peat formation associated with differences in plant cover (Dickinson et al. 2002). String mires occur on slightly sloping surfaces and are associated with periglacial climates. The water and peat are very low in nutrients.

Dominant plants are commonly mat-forming Oreobolus pectinatus, graminoids in the genera Agrostis, Carex, Juncus, Poa and Chionochloa, dicotyledonous herbs in the genera Gnaphalium, Psychrophilla and Ranunculus and bryophytes in the genus Sphagnum. Machaerina rubiginosa and woody species of Dracophyllum and Leptospermum are found in string mires at lower altitudes that have not been greatly modified.

String mires are widespread on the uplands of Otago and Southland, e.g. Hector and Garvie mountains, Old Man Range, Otago; and Kepler Mire in lowland Southland.

For the most part, the upland systems face few threats. There are occasional peat washouts, but this is part of the successional processes. Recent drives for wind-generated electricity may threaten them. All wetlands in the lowlands are threatened by fire and drainage.