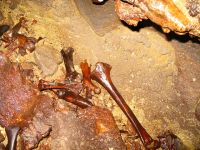 Researchers from the University of Auckland and Landcare Research have completed a new analysis of radiocarbon dated moa remains, providing the clearest insights yet into how and when New Zealand’s iconic giant birds became extinct.

The results reveal the startling speed with which extinction occurred after initial human arrival in New Zealand, highlighting the vulnerability of the slow-breeding moa to relatively low harvest rates by the first few generations of hunters.

Starting with 42 dates from the authors’ own studies, University of Auckland student Andrew Wheeler assembled a comprehensive database of radiocarbon dates on moa remains. Research leader George Perry from the University of Auckland said “in the past decade, hundreds more high-quality radiocarbon dates on moa remains have been produced, providing one of the best datasets for studying the timing of a prehistoric extinction anywhere in the world”. The team critically assessed all 653 dates to identify the highest quality and most precise dates for their analyses. Co-author Janet Wilmshurst from Landcare Research and the University of Auckland said,

“Previous studies exploring moa extinction have had to rely on older and less precise dates, and this has contributed to a long-running debate about the speed and nature of this extinction event.”

Perry and Wheeler analysed the collection of high-precision moa dates to estimate the timing of extinction for all species of moa throughout New Zealand. They also used 60 radiocarbon dates on Pacific rat coprolites (ancient droppings) and rat-gnawed seeds to provide a precise proxy for the time of initial human arrival in New Zealand, and so a “time zero” for the onset of moa hunting.

The results show that moa became extinct across New Zealand at the same time, between 1420 and 1470 AD (most likely between 1440-1445 AD) less than 200 years after initial human settlement in the mid-13th century.

Perry said “This is the first time we have been able to show, using a large number of radiocarbon dates that extinctions were rapid and synchronous across New Zealand. Moa were hunted to the point of being critically endangered within less than 150 years of settlement, after which only a few small populations clung on in remote mountain regions, but only for another 50 years before they vanished forever”.

The results also showed that there was little difference in the extinction time for the largest (> 200 kg) and the smallest (< 50 kg) moa. Co-author Jamie Wood from Landcare Research said “Extensive remains of butchered moa bones and pieces of moa eggshell in early middens show that moa were commonly hunted for food, and we always suspected that their extinction was rapid. We now know that, regardless of how big or small they were, or where they lived, all species of moa were hunted to extinction soon after initial human arrival. There is no evidence to suggest that any moa survived into the post-European era”.

Obtaining a precise estimate for the timing of extinction also allowed the researchers to examine how much hunting pressure would have been required to bring about the extinctions in such a brief time. Perry said “Based on an updated population estimate of about 58,000 moa at the time of human arrival, and on the generally accepted estimate of an initial founding population of 100 people growing at 1% per year, it would only have taken about 5 birds to be harvested per person per year to eliminate moa within 200 years.”

New Zealand is a relatively large and topographically diverse island environment, and the results from this study have implications for understanding the loss of megafauna on other landmasses, highlighting that even minimal harvesting rates could have brought about catastrophic declines in populations within a short time. Wilmshurst said “The demise of moa is one of the best-studied prehistoric extinctions globally, and we now have a much clearer understanding of when and how it happened. Sadly though, this rapid loss of megafauna from over-hunting is not unique, there are similar stories of faunal extinction repeating throughout human history. Large animals that had evolved for millions of years in the absence of humans were ill-adapted for the sudden arrival of people and the associated novel impacts of hunting, landscape modification, and introduced predators”.