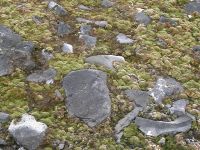 Update 1: How modern DNA-based methods can be used to infer the environmental preferences of Antarctic terrestrial species.

Antarctic biology conjures up images of penguins, seals and whales, but species that live permanently on the continent’s cold, dry land mass are rather more cryptic.

Did you know, for example, that the top predator in this biosphere is an invertebrate? And did you know that the ‘highest’ plant is a moss?

Antarctica was once the frontier of pioneering explorers pushing the limits of humankind, but this voyage of discovery is far from over.

It’s just the mission has changed. Scientists are now uncovering the continent’s secrets by delving into the diversity of its microscopic communities using cutting-edge modern research methods.

Numerous studies have utilised DNA sequencing to advance our understanding of biological diversity in Antarctica. Recent advances in sequencing technology produce reams of data from every sample, which require considerable computing power to analyse. The results allow us to test various hypotheses about the frozen continent.

These hypotheses are often strongly linked to climate change. (Indeed, funding may be explicitly directed at understanding this phenomenon.) A common reason for studying the patterns of biodiversity across landscapes is to find out what is causing these patterns – whether in eukaryotic or prokaryotic microorganisms, invertebrates or plants – and this includes changes in climate.

However, further testing is needed. For instance, studies of environmental DNA may not distinguish between the active components of communities (e.g. plants) and passive, wind-dispersed propagules (e.g. seeds). The ecological tolerances of the latter could therefore be misconstrued from purely distributional studies. Also, large-scale climate modelling may still be too coarse to be biologically meaningful at the local scale.

Our approach is to:

Our project is one of a suite of seven proposals funded in 2016 to study the extremes of life in Antarctica and its surrounding oceans.

Because our frozen collections are sourced entirely from previous scientific expeditions to Antarctica, we don’t need to visit the continent for this project. We’ll capitalise on previous science funding and aim for the smallest carbon footprint in the history of these studies!

Phil is a phycologist (specialist in algae) at the Allan Herbarium, Landcare Research, and Principle Investigator in this project. Phil contributed samples from Cape Hallet, Bratina Island and the McMurdo Dry Valleys.

Ji Hee is an an experienced phycologist and Antarctic researcher from the Korean Polar Research Institute. She recently spent 12 months at Landcare Research, Lincoln, isolating and identifying strains of algae to use in our planned experiments. Ji Hee contributed samples from Terra Nova Bay.

Ian is one of New Zealand’s most experienced Antarctic researchers, currently employed at Gateway Antarctica, University of Canterbury, Ian has worked in many areas of Antarctica and worldwide. He brings a deep knowledge of aquatic ecosystems to the project, and provides expertise and direction. He has contributed samples collected from ponds in the McMurdo Dry Valleys and the Darwin Glacier region.

Principle Investigator of the United States Long Term Ecological Research Program in Antarctica, Byron is a key figure in scientific research in the Ross Sea sector. He studies nematodes – microscopic worms that are present in many habitats, including dry valley soils. The previous work of Byron and others in the Ross Sea region allows us to use the distribution of nematode species to work out the characteristics of older samples. Byron works at Brigham Young University, Utah, USA.

John is a talented environmental physiologist at Landcare Research, John has decades of expertise designing and building experimental systems to simulate natural environments in the laboratory. He has developed an incubator that accurately follows Antarctic summer temperature traces from field measurements for use in our laboratory experiments.

With considerable skills in data analysis, including modelling, Adrian brings his ecological experience developed in temperate ecosystems to a new problem in Antarctic biology. He will construct the ecological niche model from our field data, which will be tested using our cultured strains in the laboratory.

Leading the Landcare Research MBIE-funded programme ‘Using data to understand the pressures on the Ross Sea Region terrestrial environment’, Fraser was able to provide satellite temperature data from any site in the Ross Sea region. This is essential for developing the ecological niche model and for designing the temperature treatments subsequently tested.

A molecular technician and laboratory manager at Landcare Research, Caroline has carried out most of the molecular work in the project to date, involving DNA extraction from hundreds of samples, amplifying several gene regions from each using PCR (polymerase chain reaction), checking the quality, and delivering the results to the sequencing provider.