Update 2: Meet the strains. Continental Antarctica is home to a huge variety of organisms. Eight of these are being studied in culture as part of our project. Some of these are plants, some are bacteria, and some have traditionally been treated as both. There are also two species of fungi.

What is a plant anyway? In the broadest definition it is any organism that photosynthesises (uses light energy to fix carbon) to produce oxygen. Plants obtain carbon from the gas carbon dioxide, but the oxygen is actually released from a water molecule, which is the terminal electron acceptor in the reaction. This definition includes everything we commonly think of as plants, as well as algae (including prokaryotic algae known as cyanobacteria). All of these are represented in our experiment.

Not all photosynthesisers release oxygen. For instance, the terminal electron acceptor in the photosynthesis of the purple sulphur bacteria is hydrogen sulphide. This means they produce sulphur, not oxygen, and in fact live in anaerobic (oxygen-free) environments. These organisms cannot readily be regarded as plants and are not included in our study.

Above we mentioned ‘everything we commonly think of as plants’. By this we mean the embryophytes: photosynthetic organisms that produce embryos that are nutritionally dependent on the parent plant. These include the bryophytes (mosses, liverworts and hornworts), ferns and their allies, gymnosperms (such as pine trees), and angiosperms (flowering plants).

In our experiment only one of these is present: the moss Bryum pseudotriquetum. If that seems surprising, consider that bryophytes are the only one of these groups naturally present in the Ross Sea sector of Antarctica.

The organisms being tested in our experiments are as follows. The experiments require them to be grown on agar plates. All the images are of our strains.

Autotrophs (organisms that make their own food; i.e. plants) 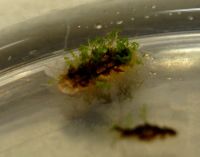 This is a moss commonly found in Victoria Land. Although in traditional terms a ‘higher plant’, mosses in Antarctica are usually quite tiny. Large growths of algae (the individuals of which are microscopic) are often much more obvious. Thus you could easily argue that algae are the dominant plants on the continent, especially if the surrounding marine environment is considered (where phytoplankton and seaweeds proliferate). For an unusual exception, in which Antarctic mosses produce lush green growths at Cape Hallet, see the previous post.

In the image right, B. pseudotriquetum is growing on an agar plate. The entire visible plant is about 1 cm across.

This is a macroscopic green alga, commonly found in areas influenced by birds. Species in this genus are well known from ‘enriched’ environments. In other parts of the world they proliferate where drunks stagger out of pubs and urinate against walls! This species forms macroscopic green blades. This image (taken at × 1,000) shows a microscopic filament from an early developmental stage.

Here is another alga, this time a microscopic unicell, which is widespread across some inland Antarctic sites. The green areas of the cells in the image below (again at × 1,000) are chloroplasts, where the light-harvesting reactions of photosynthesis take place. The darker ring inside the chloroplast of the cell at extreme right is a structure known as a pyrenoid, which is found in many algae (and also the hornworts). The pyrenoid contains a high concentration of photosynthetic enzymes, and in green algae (such as Chlorococcum) the product of photosynthesis – starch – is laid down around it, enabling the structure to be easily seen.

This cyanobacterium is widely reported from Antarctica (although most records name it as Phormidium autumnale). This strain, isolated from a Terra Nova Bay sample by Jihee Kim during her recent time at Landcare Research, is shown by DNA sequences to be near-identical to one previously isolated from the Wright Valley, inland and to the south. The filaments of this species are motile. The time-lapse images right (each taken about a second apart) show two individuals gliding towards, then slithering around, each other. 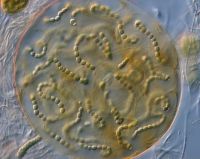 Another very common Antarctic cyanobacterium, this species often catches the attention of visitors because it can grow in irrigated terrestrial environments, sometimes hectares in size. Our strain was also isolated by Jihee Kim from Terra Nova Bay. In the image below, a spherical colony of Nostoc filaments can be seen embedded in mucilage. This jelly-like substance retains water and is one reason for Nostoc’s wide success, greatly reducing the problem of dehydration. Another important characteristic of the genus is the ability to fix atmospheric nitrogen as well as carbon. Carbon fixation (photosynthesis) produces oxygen, a molecule that is deleterious to the nitrogenase enzyme, so Nostoc carries out nitrogen fixation in specialised non-photosynthetic cells called heterocytes.

Heterotrophs (organisms that must ingest their food preformed)

A. psychrotrophicus was recently isolated by Phil Novis from soil collected by Paul Broady in the 1980s. The antifreeze proteins of this fungus have been studied previously by others, who isolated it from another area of Antarctica. The fuzzy-looking structures visible on the agar plate in the image below are fruiting bodies.

This strain was isolated by Phil Novis from a Garwood Valley stream sample. The genus is known to be a prolific source of spores in maritime Antarctica and may occur in lichens. The colony in the Petri dish here has been subsampled for DNA extraction and sequencing.

This heterotrophic bacterium was isolated from soil collected from the La Gorce Mountains (at 86°S, the most southerly site included in our project) by Jackie Aislabie of Landcare Research. She kindly made this strain available for our experiments.