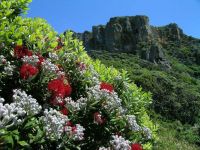 Conservation palaeoecology is increasingly being recognised as a tool that can help to inform both restoration and conservation of island reserves by providing prehuman vegetation baselines.

Many of New Zealand’s mammal-free offshore islands are focal points for  the conservation of biological diversity and, like many islands in the  Polynesian region, were deforested following initial human settlement. Current  efforts to restore, replant and manage offshore island reserves are guided  either by historic vegetation descriptions or the current presence of native species  on forested islands.  However Janet and  her colleagues have just published a paper that shows this may be misguided –  significantly so for the Poor Knights.

The Poor  Knights Islands (25-30k east of Whangarei) home to endemic fauna and flora (the Islands have been separated from the  North Island for at least 2 million years). They have no introduced  mammalian predators, including rats, and are the only known breeding site for  Buller’s Shearwater. Ngatiwai are kaitiaki (guardians) of the islands, which they declared tapu (sacred  covenant) in the early 1800s after being invaded by northern iwi, which  prohibited further habitation and gardening on the islands. Gardens and other  signs of former habitation have long grown over in a succession of vegetation,  which has culminated in the current dominance of pohutukawa and other native  flowering trees – vegetation that is generally assumed to be climax forest and  which is similar to that found on many other small, forested, offshore islands  in northern New Zealand.

Tawhiti Rahi is the largest of the Islands (163 ha, maximum elevation  191 m) and has several shallow valley systems with ephemeral streams. Janet and  colleagues from Ngatiwai and the Department of Conservation collected a soil  core from the head of one of these streams.   While this core was only 85 cm long, it produced a 2000-year record of  vegetation change that began >1200 years before human settlement and spanned  550 years of human occupation and the last 180 years since Ngatiwai permanently  lived on the island. The analyses of pollen and ancient plant DNA in the soil  core revealed that, over this time, a near-complete species turnover occurred  and two once-dominant forest species (a conifer and a palm tree) became extinct  on the island.  There is no modern equivalent  of the prehuman forests on any northern New Zealand island yet the analyses  provide clear evidence for conifer- and palm-rich forests in the prehuman era.  Obviously this challenges the assumption that what currently exists is climax  forest – at least not the climax forest that would have occurred in the total  absence of people.

Vegetation  reconstructions such as these are becoming increasingly important for conservation  managers responsible for decisions about the long-term future of degraded  offshore islands. For example the pollen based reconstructions can help to determine  the likely rate and direction of successional changes that have occurred in the  past; they can help to determine whether natural rates of succession are  preferable to more costly replanting programs; and they can provide species  lists from the island’s long history if restoration replanting is desired.