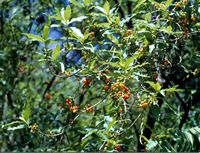 This key was designed to be used by someone who already has some skills in plant identification.

It assumes that you are able to identify that you have a Coprosma rather than a plant of another genus. If you are unsure of the genus, we recommend Wilson & Galloway's (1993) Small-leaved shrubs of New Zealand, which includes all the genera that are similar to the small-leaved coprosmas. This key also assumes some knowledge of botanical terminology, we have used terms like glabrous, petiole, and stipule, and these are defined in the glossary. We have attempted to simplify the terminology whereever possible to make the key useable for as wide an audience as possible.

The key should be particularly useful to anyone who needs to be able to make correct identifications of Coprosma species using material that may not be ideal, in particular, using plants that lack ripe fruit. Ripe fruit are generally only available in autumn, while the season when most fieldwork is done in summer. This is one of the reasons for constructing this key, to get around the frequent lack of availability of fruit. The other reason for constructing this key is to include all of the new species published in the last 10 years (e.g. in Jane 2005).

How to examine a Coprosma

This key is suitable to use with both fresh and dried material.

The most reliable and helpful characters in this key that are always worth using are:

The key assumes that you will make fairly exact measurements of leaf dimensions (to within ? 0.5 mm), and look carefully at a number of leaves for hairs.

Beyond these characters, we recommend that you enter any of a number of distinctive characteristics possessed by a small subset of the species. Examples of these are:

These characteristics can be powerful when obviously present, but these characters work poorly in reverse, when only weakly present or absent. For instance, a leaf that is not distinctively glossy and might be described as moderately glossy is probably not worth scoring for this character. Branchlets that are red-brown distinguish a small number of Coprosma species, but the common alternative, a grey-brown coloration, is unlikely to reduce the list of remaining species very much.

We have found that distribution of hairs on the leaf (petiole, margins, apex) discriminates between similar small-leaved shrub species, but to see these hairs requires a strong hand lens in good light, or a dissecting microscope with good oblique light to make the tiny hairs visible.

Stipule characters (presence of a sheath, marginal teeth, marginal hairs) have been emphasised in the New Zealand literature. Our experience is that stipule differences between the small-leaved shrub species are less helpful than differences in leaf hair distribution. Stipules are perhaps most useful in distinguishing the large-leaved Coprosma species. In this key the stipule always refers to its appearance at nodes near the apex of branchlets.

Do not rely just on the key itself. Also use the images and the information in the factsheets. For the small-leaved shrub species, a good strategy is to eliminate all but half a dozen species, then scroll through the images looking for a match for your specimen, and check the factsheets, paying attention to the diagnostic characters and comparisons between similar species.

The key assumes that you have access to a dissecting microscope with strong lighting, or a hand lens with magnification of at least 10x, and strong lighting. This is needed in order to see the small leaf and stem hairs.

Terms are described in the Glossary that can be accessed from within each factsheet.

Ecological provinces have been used to divide up the North and South islands. The provinces are those of Wardle (1991) who based them on Leonard Cockayne's botanical districts, but adapted them to fit the classification of New Zealand into ecological regions.

Altitude limits have been taken from the literature and collections at AK and CHR and are comprehensive, but be a little cautious in using altitude as a character.

Limitations of the key

Many of the features traditionally used to identify the species of Coprosma (such as a long tapering winged petiole) work well when obviously present but work poorly in reverse. There are two reasons why these characters work poorly in reverse. One is that the presence of the character excludes most species (only 14 of the 65 taxa have a long tapering winged petiole), while the lack of the character excludes few species (56 of the 65 taxa remain). The second reason is that intermediates are common. This has been the main difficulty in designing this key, that many of the characters traditionally used in Coprosma work well in only one direction. Characters that are distinct in their extreme form are:

You should use these characters where the characteristic is obviously present.

Leaf length and width are two of the most useful characters in this key and can be used with confidence. Both open and shade plants have been used to score the key. Leaves of seedlings are larger in some species (e.g. Coprosma propinqua), but have not been included in the ranges of leaf length and width.