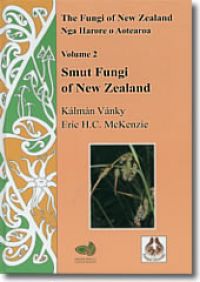 Smut fungi are microscopic lifeforms that grow as plant parasites. They are common on grasses, sedges, and rushes. Most smut fungi produce powdery spores that are dark-coloured, similar to the spot or smudge made by small flakes of soot.

In this monograph all 93 spcies of smut fungi known from New Zealand (plus one species found only in a quarantine, containment glasshouse) are described. Approximately 60% of the smut fungi in New Zealand are thought to have been introduced, in many cases accidently with seeds.

Most of the species are illustrated with line drawings of their habit on the host plants and by photomicrographs of their spores, taken by both scanning electron microscopy and light microscopy.

There is a key to the 25 genera of smut fungi known from New Zealand, and the 216 host/pathogen combinations in New Zealand are listed.

A Preface and Popular Summary are included with translations in Mäori.