Volume 4: Fungi on trees and shrubs in New Zealand 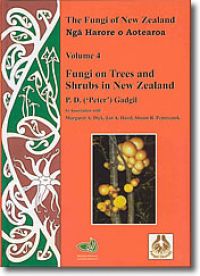 In this book, some 700 fungi associated with trees and shrubs in New Zealand are described. They include pathogens of forest trees and horticultural crops, beneficial mycorrhizal fungi and saprophytes which live on dead portions of living plants. Short descriptions of life cycles of the major group of fungi included in the book are provided. For each fungus, a description of the organism, its distribution within New Zealand and its significance are given. The fungi are grouped according to the part of the plant on which they mainly occur and then according to their broad taxonomic group. There are also separate chapters on groups of fungi related in form or function: downy and powdery mildews, rusts and smuts, sooty moulds, and mycorrhizae. A list of host plants and their associated organisms is provided. There are colour illustrations of fruit bodies or disease symptoms of 90 fungi.