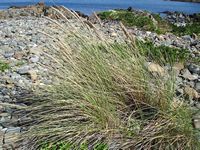 The NZGrass Key is a Lucid 3.5 multi-access key. The key is web-based and requires Java to run on the Internet. The key is illustrated with over 2300 images and is connected by hyperlinks at the species level to the digitised version of the Grass Flora and Ngā Tipu o Aotearoa - New Zealand Plants (a database derived from the New Zealand Plant Names database and the Allan Herbarium Specimen database).

The key includes 439 species and 4 hybrid taxa of indigenous and naturalised grasses of New Zealand.

This is less than the total number of 460 species recorded in Flora of New Zealand Volume 5 Gramineae (Edgar & Connor 2000). Thirty-five of the 45 species listed as transients in the flora have been left out as they have been recorded just once or twice in early times of European colonisation and not recorded since or, for a few cases of more recent records, it is unlikely that these species have established or persisted.

The key uses data contained in the descriptions of the Flora of New Zealand Volume 5 to produce a new key to all grass species in New Zealand. New data have been added for species in genera that were missing values for numeric ranges – Chionochloa, and Rytidosperma. The key also incorporates, for many species, extensions in ranges of quantitative characters from new incoming specimens into the Allan Herbarium.