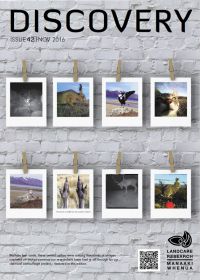 At Landcare Research our passion and commitment are to create new knowledge and practical solutions in the management of biodiversity and land resources. The stories featured in this online edition of Discovery are examples of the progress we are making with our partners and clients.

But first, we have some exciting news – science and research proposals led by Landcare Research won a total of $50m from MBIE’s new Endeavour Fund over the period to 2021. Included are 6 long-term programmes and four shorter-term “Smart” innovation projects. This is great support for progress towards national priorities in biodiversity and sustainable land-use.  A summary of the new programmes, including contact details for their leaders, is available on our website. Those programmes started last month, within days of the result being announced!

In this online Discovery our stories involve plenty of innovation and partnering to increase the impact of our work for the benefit of New Zealanders.

Dr Grant Norbury has been applying chicken, quail, and gull odours in banded dotterel habitat to disrupt the ability of predators to find their prey by scent. The aim of this “chemical camouflage” in the MacKenzie Basin is to increase the nesting success of birds in braided river systems. This novel approach, developed in Australia, has never before been tested on such a large scale. Preliminary results look encouraging.

Dr Janine Duckworth’s innovative idea to use possum urine as an attractant has resulted in an increase in possum trapping efficiency by as much as 25 per cent. Janine has been working with Zero Invasive Predators Ltd to develop a synthetic version of this pheromone lure, with trials expected to get underway soon.

Dr Bruce Warburton has been leading efforts with Canterbury and Otago Regional Councils to curtail the spread of wallabies. Innovative thermal imaging cameras used from helicopters are showing promise in detecting low numbers of wallabies.

Dr Bev Clarkson has been working for many years alongside partners Waikato-Tainui to protect and restore precious wetlands in the rohe. Now a handbook on wetlands, ‘Te Reo O Te Repo: The voice of the wetland’, has been produced that is written from a cultural perspective. The handbook covers how to engage with whānau, hapū and iwi, as well as tools to assess and monitor a wetland from a cultural perspective, and how to protect and enhance the cultural resources within wetlands.

Dr David Whitehead has been leading collaborative efforts at the Ashley Dene Research and Development Station to find solutions to nitrogen leaching and greenhouse gas emissions for intensive, irrigated farming on Canterbury’s stony soils. This work takes an integrated approach, looking at the relationship between the carbon, water and nitrogen cycles. It also plays to the strength of the new Lincoln Hub He Puna Karikari, in linking CRIs, Lincoln University, and DairyNZ.

This is a busy time with important development of Research Roadmaps for Conservation and Environment and for primary industry; the development of plans for the long-term Strategic Science Investment Fund; and new bidding for the Endeavour Fund. To target that bidding we have enjoyed the co-innovation workshops we recently convened with numerous clients in Wellington recently.

We would like to thank you for your support and interest in our work, and look forward to bringing you more of our stories in the New Year.

Landcare Research chief scientist, Dr Fiona Carswell, responds to a suggestion by the Parliamentary Commissioner for the Environment, Dr Jan Wright, that marginal hill country should be reverted back to native bush to offset greenhouse gas emissions.

The majority of New Zealand’s most deadly predators – stoats, ferrets, feral cats, and rats - rely on smell to hunt. But, could this be used against them? Landcare Research, in collaboration with the University of Sydney, is testing this theory to help native birds when they’re at their most vulnerable. Preliminary results look encouraging.

There are two key animal instincts – feeding and reproducing. Landcare Research scientist Dr Janine Duckworth is using the latter to increase the effectiveness of possum traps, minimise the use of poisons such as 1080, and aid in the vision of a predator-free New Zealand.

Wetlands play a vital role in maintaining the water quality in our rivers, lakes and streams, and are considered taonga, or treasures, by Māori, but only a staggering 10 per cent remain in New Zealand. Waikato-Tainui has been working with Landcare Research to restore wetlands in the region as part of an effort to clean-up the country’s longest river.

Finding pests, such as wild goats, deer, pigs, and wallabies, to control numbers can be difficult at the best of times, but it is particularly difficult with small numbers across vast areas of dense shrub. However, thermal imaging technology appears a promising solution. Landcare Research has been investigating its potential in helping stop the spread of Bennett’s wallabies.

Irrigation has enabled the expansion of intensive farming – particularly dairying – on shallow, stony soils, but these properties increase the vulnerability of nitrogen leaching, potentially affecting water quality. Landcare Research is collaborating with several research organisations at a Canterbury research farm to find solutions.

In Western Australia, where Stan Bellgard is from, they call Phytophthora a ‘biological bulldozer’. Catchy name, isn't it? And Phytophthora agathidicida (or PTA), more widely referred to by New Zealanders as ‘kauri dieback’, is proving equally destructive.

Landcare Research scientists have made an important discovery about the ubiquitous farming practice of letting grass grow under your gumboots. Soil scientist Dr Paul Mudge, in collaboration with DairyNZ, has discovered that the introduction of herbs into ryegrass pastures can increase annual dry matter production by 1.3 tonnes per hectare.

Landcare Research is using sensor technologies, similar to those used on the Mars rover, to rapidly scan soils and estimate soil organic carbon stocks. Visible near-infrared (Vis-NIR) spectroscopy is being used on a custom-made soil scanner by Landcare Research as part of a Global Research Alliance (GRA) project, led by CSIRO, Australia.

A collection of New Zealand fungi could play a vital role in solving one of the world’s most serious health concerns.

The Environment Canterbury biosecurity team remember it (for it was the best name they could conjure) sitting ‘on the smoko room table and not having any idea what it was’.

A high country sheep farmer is leading the fight against a putrid-smelling weed that reduces lucerne yields, wool quality and taints meat.

A parasitic wasp is the latest weapon scientists are investigating in the war against wasps.

This A3 poster has some of our favourite animal selfies!