The total ice-free area of Antarctica comprises less than 0.4% of the continent. The ice-free regions, of which about 90% are soil forming, are located mainly on the continental coastline, particularly on the Antarctic Peninsula and in the McMurdo Dry Valleys in the Ross Sea Region. 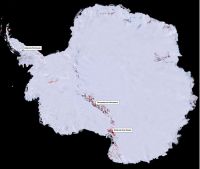 Approximately half of the ice-free ground occurs in the Ross Sea Region, including the largest continuous expanse of ice-free ground, the McMurdo Dry Valleys. The soils are cold desert soils and classified as Anhyorthels where depth to ice-cemented permafrost is > 70 cm. However, in coastal areas depth to ice-cemented permafrost is often < 70 cm and soils are classified as Haplorthels. Antarctic soils are characterised by extremely low soil temperatures, with an average mean annual temperature ranging between –15°C and –40°C, and low soil moisture. Antarctic soils are diverse, mainly due to differences in land-surface age (which ranges from a few thousand to millions of years), parent material, topographic position, and local climate variation.

Antarctic soils comprise a surface pavement and a seasonally thawed active layer over permafrost. The surface pavement is a layer of gravel, stones or boulders formed largely by weathering and the removal of fine materials mainly by wind action, and varies in appearance due to rock type and weathering differences. Beneath the surface pavement is the active layer with depths ranging from 17 to 55 cm. The soil texture in the active layer, when not frozen and ice-cemented, is often loose and unconsolidated. The colour of the subsurface varies according to the age of the soil and parent materials. Permafrost (defined as soil that remains at temperatures < 0°C for two consecutive years) underlies all exposed ground surfaces, except for those heated by volcanic activity. Near the coast the permafrost is usually ice-cemented because of greater precipitation. At inland sites, particularly the Dry Valleys, the water content of the permafrost (generally <5%) is insufficient to cement the soil particles together, and the permafrost soil is loose and is described as dry permafrost. In some areas permafrost may consist almost entirely of ground ice believed to be up to several million years old.

The soils typically have low levels of carbon and nitrogen (<2%) and are low in clay; consequently they have little pH buffering capacity. A notable exception are ornithogenic soils formed under penguin rookeries, which have a carbon content around 20% and total N around 10%. Soil pH ranges from weakly acidic (pH 6) in inland soils at high elevation to highly alkaline (pH 9) in soils of coastal regions. This reflects the dominant salts: in soils near the coast chlorides dominate, whereas in inland soils nitrate and sulphate salts predominate. The salt content in the soil increases with dryness and surface age. The salts in older, drier soils commonly occur as a salty, firm layer about 5–15 cm below the soil surface. Salt encrustations are common under surface pavement rocks.

The prevailing soil conditions create a harsh environment for plant and animal life. Only a few plants and animals have managed to colonise and survive in ice-free regions. Microbes, however, are distributed throughout soils of the Ross Sea region, with highest numbers detected in moist coastal areas compared with dryer inland soils.

Ice-free areas are the most biologically active terrestrial sites on the Antarctic Continent. They are also the focus of human activity and continue to attract scientists and increasing numbers of tourists. The majority of the operating scientific research stations are located in ice-free regions.