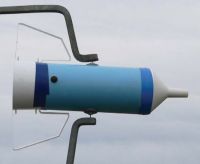 Figure 1. Side view of an ammonia sampler, affectionately called “space shuttle”. The sampler rotates itself into the wind (here blowing from right to left). Inside is an elaborate array of metal surfaces coated with oxalic acid that traps the ammonia.

Gaseous ammonia is generated at the soil surface, following the application of any source of nitrogen that also induces an increase in soil-surface pH. The main such sources are animal excreta and some fertilisers (urea, diammonium phosphate).

The ammonia is volatilised at rates that can vary extensively and be transported away by the wind. Some ammonia reacts to form atmospheric aerosols, which present a health hazard and contribute to the formation of acid rain. Another fraction gets re-deposited on soil surfaces, where it constitutes an indirect source of nitrous oxide, which is why ammonia emissions need to be accounted for in the national greenhouse gas inventory. That need prompted MAF (now MPI) to fund a project to investigate ammonia emissions from cattle excreta.

Two experiments were conducted to determine emission rates in situ, in undisturbed atmospheric flow conditions. In both experiments, excreta were deposited inside a circle of 16 m radius, on the surface of a previously mown paddock. Horizontally transported ammonia was collected with samplers (Figure 1) at five heights in the centre of the treated circle, and emission rates computed with a mass-budget method. Sampling concluded when, after several days, the collected ammonia amounts had dropped to the resolution limit of the analysis method.

In the first experiment, a regular pattern of 156 realistically sized cattle urine patches (1.5L urine each) was poured within the circle. That way, the amount of applied nitrogen was accurately known, and 25.7% of that was found to have volatilised as ammonia over 6 days. The timing of the emissions reflects a chain of three processes: equilibrium exchange between ammoniacal-nitrogen dissolved in the soil water and gaseous ammonia at the water-air interfaces (within the soil pores), diffusion of gaseous ammonia in the soil layer, and diffusion of gaseous ammonia in the atmospheric surface layer between ground and sampling height.

In the second experiment, 12 cattle were kept inside the circle for 3 days, and fed with known amounts of fresh grass. The amount of nitrogen deposited with the urine and dung was estimated by analysing feed samples for nitrogen content and digestibility. Of the total nitrogen excreted, 78% was contained in urine. Over 13 days, 22.4% of the nitrogen excreted was volatilised. Most of the emissions occurred in the first 5 days, and a secondary maximum appeared on Day 9 (Figure 2). Measurements on a few urine patches and dung pats, created outside the circle, showed that the pH inside the dung pats rose more slowly and peaked later than in the urine patches, suggesting that the secondary emissions peak originated from dung. Separating urine and dung emissions accordingly led to the estimate that urine accounted for 88.6% of all ammonia emissions. 25.5% of the urine-nitrogen volatilised (as in the first experiment), and only 11.6% of the dung-nitrogen volatilised.

Both experiments were conducted in late summer, when soil temperature was 18 °C. In cooler conditions the emissions would have been slower and less in total. Taking this into account, the observed emission rates are compatible with an annually averaged emissions factor of 10%, for urine-nitrogen and dung-nitrogen combined, as presently used in New Zealand’s inventory.