Improve measurement, management, and protection of New Zealand’s terrestrial biodiversity, including in the conservation estate

The integrity of New Zealand’s natural heritage is central to our identity, lifestyle, and economy. Intergenerational responsibility for the management of native ecosystems and species, expressed through kaitiakitanga, is also central to Māori aspirations.

Much of our biodiversity is outside protected areas, and is under increasing threat from invasive species, climate change, agricultural intensification, and land conversion to plantation forestry, mining, and urban development.

We work with DOC, regional councils, wildlife sanctuaries, non-governmental and community groups to deliver this Outcome for New Zealand, as well as contributing through major national initiatives such as the BioHeritage Challenge, Better Border Biosecurity, and Predator Free New Zealand. Increasingly, our work in this area also supports private landowners and the primary sector to take action to conserve biodiversity on private land.

The biologically based Nationally Significant Collections and Databases that Landcare Research hosts on behalf of all New Zealanders are central to this Outcome. They are national science assets that underpin the authoritative identification and description of both native species and invasive pest species, which put these at risk.

Impact 1.1: Trends in national and regional biodiversity on public and private land are known and understood, based on best available definitions and descriptions for species and indices of ecological integrity. 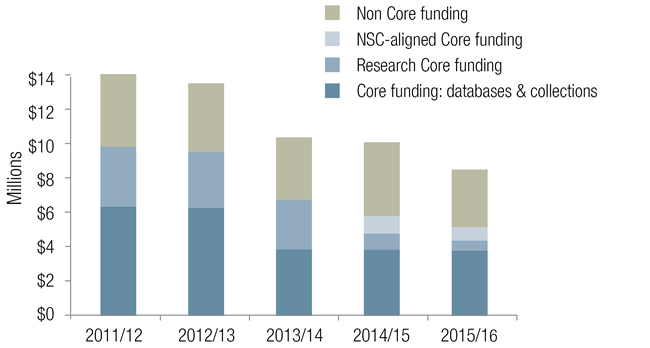 Key Performance Indicator 1.1: DOC and regional councils are using comparable metrics to measure status and trend and impacts of interventions on biodiversity within their jurisdictions.

Genome sequences for Psa released: We released the genome sequences for 62 type and pathotype strains of Pseudomonas syringae (Psa). This is a nationally important resource for those working in biosecurity and will, for example, enable development of a diagnostic test for this significant plant disease (e.g. affecting the kiwifruit industry). There are now reference sequences for every gene in every (known) pathovar, and we are now close to knowing the full complement of pathogenic effector genes for these strains.

Leadership in Intergovernmental Platform on Biodiversity and Ecosystem Service (IPBES): We developed guidance on including indigenous and local knowledge, and indigenous peoples and local communities, in regional and global assessments led by IPBES. This is an important piece of work in both global research and policy contexts, and showcases Landcare Research’s – and New Zealand’s – leadership in traditional knowledge research.

New online database of ‘true bugs’: We completed an online database of true bug (Heteroptera) taxonomic names and deployed these via the New Zealand Arthropod Collection Portal. This searchable online database contains nomenclatural and bibliographic information associated with native and naturalised New Zealand Heteroptera. The database provides valid or preferred names, main synonyms and biostatus, and links to relevant catalogues and revisions. The true bugs are an important taxonomic group, and we expect this new work will be well used by both biodiversity and biosecurity end-users.

Impact 1.2: Frameworks are in place to ensure the most threatened ecosystems, habitats, and species are managed to reduce the risk of decline in native biodiversity.

Key Performance Indicator 1.2a: RMA consents related to land-use change are informed by a scientifi cally-based set of criteria that take account of cumulative effects on habitat availability.

Key Performance Indicator 1.2b: Management decisions by DOC, MPI and regional councils, aimed at reducing threats to species and habitats, are based on robust risk models that reflect best available knowledge about the efficacy, cost, and acceptability of management strategies and tools.

Beetles help wage 'War on Weeds': We released tradescantia tip beetle, tradescantia leaf beetle, and tradescantia stem beetle on the Hikurangi floodplain in Northland to manage the invasive weed, tradescantia, which takes a heavy toll on native species by smothering the ground, preventing regeneration. The Hikurangi floodplain is a ‘biodiversity hotspot’ characterised by nationally significant forest and wetland. The release of new biocontrol species to manage the impact of tradescantia synergistically highlights the importance of Landcare Research’s weed biocontrol work in areas of high conservation status where chemical control is not appropriate.

Rabbit impact on Hawke’s Bay pasture: Using grazing exclusion experiments, we measured the effect of low, medium, and high rabbit abundances on pasture growth and estimated the financial cost of rabbit grazing, based on the number of additional ewes that could have been grazed in the absence of rabbits. The estimated net annual benefit of controlling rabbits ranged from NZ$577/ha at low rabbit abundance to NZ$1707/ha at high abundance. Rabbit control is therefore economically justified in Hawke’s Bay, even when rabbit abundance is relatively low.

New approach to managing kauri dieback: We have developed a new diagnostic approach for visualising early infection by Phytophthora agathidicida, the causative agent of kauri dieback. By using microscopy and fluorescent in situ hybridisation (a molecular marking technique used on intact plant material), we can now easily detect the pathogen in kauri just 5 days after infection, facilitating the early-stage detection and management of the disease. MPI and DOC are both very interested in this work and how to take it forward to application.

‘Trojan Female’ Technique: We demonstrated that reductions in male insect fertility caused by our new genetic-based approach to pest control result in consistent and marked reductions in breeding success. We are following up with laboratory trials to show that these reductions then go on to drive populations down in size. This work will help manage the critical biosecurity threats that insect incursions pose (e.g. the Queensland Fruit Fly, painted apple moth, and other similar recent insect incursions).