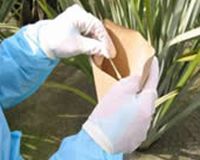 Projects must have prior approval from either the Environmental Protection Authority (EPA, previously called the Environmental Risk Management Authority (ERMA)) or an EPA approved Institutional Biological Safety Committee (IBSC), and must comply with Hazardous Substances and New Organisms (HSNO) legislation. All research on new organisms is carried out in containment facilities that are regularly audited by MPI.

We are not undertaking any research into developing new genetically modified organisms (GMOs). However, some areas of our research use EPA-approved low risk GMOs (non-pathogenic strains of Escherichia coli and bacteriophage lambda) in approved containment facilities. These organisms are standard laboratory tools in research to answer identification, taxonomic, population or evolutionary questions for genes and organisms from native or valued flora and fauna. These non-pathogenic strains are not capable of causing disease in humans, animals, plants or fungi; do not normally infect, colonise, or establish in humans; nor do they produce desiccation-resistant structures, such as spores or cysts. As such, they are considered Category 1 host organisms as defined in clause 7(1) of the Regulations, and the EPA approval covers 13 different research organisations and universities.

Some of our research involves the importation of new organisms (for example, to assess the efficacy and safety of new agents for the biological control of weeds). This year we received two ‘new organism’ approvals from the Environmental Protection Agency (EPA): one to import into containment six tropical plant species (Mikania micrantha, Passiflora rubra, Passiflora laurifolia, Passiflora maliformis, Allophylus timorensis and Wollastonia biflora) for assessing potential biocontrol agents, and for producing clean cultures of biocontrol agents for export; and the other to allow research into fungal biocontrol agent in the Beever Plant Pathogen Containment Facility at Auckland.