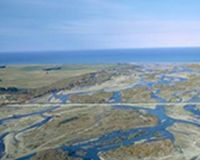 These data include all water used in scientific experiments, water-cooled scientific equipment, irrigation of grounds and general glasshouses (including field trials), vehicle and equipment washdowns and also the water used in building new infrastructure and refurbishments of buildings.

Water is an increasingly topical issue in many parts of New Zealand, especially in dry regions (such as Canterbury and Nelson) and large metropolitan areas such as Auckland. We ensure new building projects include installation of rainwater harvesting systems wherever possible (for example, such as on our Greenhouse Gas Research Facility at Lincoln). This is reflected in our generally declining use of potable municipal water.

Water saving at our Auckland site

When we built our new facility in Auckland we incorporated systems to collect rainwater runoff from the main roof for re–use in glasshouse irrigation systems. The city water supply is used in laboratories, the kitchen, washbasins and showers, which have low–flow fittings.

In addition to this the new Beever Plant Pathogen Containment Facility rain water runoff is captured in a separate tank that is used as a back-up to another two tanks. All the water used inside the building (showers, water plants, wash areas) passes through a boiler unit before going to the sewer. (The toilet and hand basin are not inside the containment part of the facility.)

All outside mains water tap heads were removed (but are available from Administration staff) and water pulse meters installed.

In spite of our rain–water harvesting system providing about half the total water used by ourselves and our co–tenants MPI, MPI’s purity requirements for their specialist glasshouses prevents their use of rainwater stored in our tanks.

Stormwater management at our Auckland site

Wastewater and stormwater runoff from impervious surfaces such as roads, carparks and roofing is a significant issue in urban areas, particularly Auckland. The increase in impervious surfaces is exacerbating localised flooding issues, and scouring and polluting streams. The coastal receiving waters are becoming increasingly contaminated. Reducing and mitigating these problems is part of the urban design research that we undertake in Auckland. We are using our own facilities as part of research into effective bioretention systems for reducing both the volume of water and the contaminants going into the city stormwater system.

Run–off from the carparking area flows into a shallow swale that absorbs some water and contaminants. Water leaving the swale flows under the building (via a pipe) and into a specially constructed raingarden; water in excess of what can be detained by the raingarden flows into the city stormwater system. This only occurs in periods of heavy or prolonged rain. This combination of swale and raingarden has also been proving very efficacious in removing contaminants.

Although living green roofs are increasingly common overseas, adoption in New Zealand has been impeded by lack of local data on suitable materials and performance in New Zealand conditions. In recent years, we have worked with University of Auckland’s School of Engineering and Auckland Council to develop a resilient light–weight substrate based on locally available materials and which conforms to international standards. We tested over 45 native and non–native plants, and quantified the performance and maintenance needs of the roofs. Trial living roofs in Auckland retained a median of 82% of rainfall per rainfall event, and reduced peak flow by a median of 93%. Living roofs had a moderating effect on external roof and internal building temperatures, making them cooler in summer. Other benefits include increased biodiversity and pollination services.

Considerable effort has gone into disseminating findings to planners, stormwater engineers, architects, landscape architects, contractors, industry suppliers and home owners with the support of Auckland Council and Auckland Botanic Gardens. Increasing the number of installations across domestic, commercial, private and public applications is a key step to making green roofs the norm in New Zealand, and it is pleasing to see such widespread community support advocating their extensive use in the rebuild of Christchurch.

Water usage at other sites

We are committed to reducing our consumption of potable municipal water for irrigation, toilets, vehicle washing and other such operations by installing rain-water harvesting systems on new buildings and retro-fitting them to existing buildings as funding allows. Our scientific laboratories generally require pure water (including ultra-pure water from reverse osmosis pumps) and their water consumption varies enormously throughout the year according to what work is being undertaken and whether water-cooled equipment is in use.