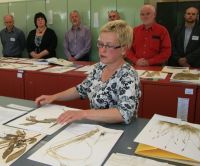 Allan Herbarium Manager Ines Schoenberger at the function to mark the $1.2m refurbishment of the facility in December 2012

Landcare Research plant systematics staff are using their expertise and resources to help agencies understand the status, trends and management of our native and exotic flora.

This research has included the discovery of new native species, improving the understanding of species (particularly those with high conservation values), and meeting customers’ needs for plant information, identification and training.

A recent revision of coastal cresses (Lepidium) recognised 11 new native species; all have high conservation values and are actively managed by the Department of Conservation (DOC).

Other discoveries include two new species of alpine Gingidia, a highly unusual Cardamine (bittercress), a wire rush (Empodisma robustum) that is a dominant component of the rare and ecologically important domed peat bog habitats of the Waikato, and two new fern species (Hymenophyllum pluviatile and Gleichenia inclusisora).

An unknown moss collected on Stewart Island was identified as Tayloria tasmanica, a rare species previously only known from Tasmania. A new indigenous wetland species of Centrolepis and two new indigenous species of Sticherus shared with Australia were discovered while preparing electronic Flora of New Zealand (eFlora) treatments of Centrolepidaceae and Gleicheniaceae, respectively. These are significant new discoveries that will require monitoring and further surveying by DOC.

Following on from the recent review of the conservation status of the New Zealand flora, we have provided public information on collections in the Allan Herbarium for those species listed as ‘data deficient’ (lacking in distribution and abundance data).

The project updated existing information by providing historical data on species recently assigned to this category, and by including data on recent collections in this category as a whole.

In total, 3343 records for specimens of 64 threatened or data-deficient plants in the New Zealand Threat Classification System (de Lange et al. 2009) were created or modified during this project.

Together with the DOC, University of Otago and Unitech we have improved the understanding of the conservation status of indigenous lichens. The list comprises 1799 formally accepted taxa, including 11   ‘threatened, 176 ‘at risk’, and 975 ‘data deficient’. A further 636 taxa were considered ‘not threatened’. Another five lichens may warrant further conservation attention once their taxonomic status is clarified.

A key element to improving understanding of the conservation of our indigenous biodiversity is increasing awareness and knowledge of the threats posed by weeds. We have been continually updating information about weed species held in the Allan Herbarium and making this available to the public.

We have been focusing on weeds species listed in the National Plant Pest Accord (NPPA), Unwanted Organisms register and the DOC Weed list, and where necessary have derived spatial co-ordinates for these specimens. To increase our information on the spread and abundance of these weeds we have significantly increased the number of specimen records that are held in the Allan Herbarium. (The total number of plant specimens held in the Allan Herbarium increased by 7907 in 2013, to about 620,000.)

eFlora has been enhanced with an additional 1000 descriptions from the flora of New Zealand series and new treatments have been completed for the fern families Equisetaceae, Loxsomataceae, Marsileaceae, Psilotaceae and Salviniaceae. In a new initiative the moss eFlora treatment of Amblystegiaceae has been completed, providing fingertip access to the most current information.

Distribution records for weeds were among the most common requests handled by our plant systematics staff in 2013, which highlights the importance of accurate information to biodiversity managers.

Our plant systematics staff handled well over 1100 requests for information or identification services in 2013, including 385 requests from DOC staff and 335 for MPI and regional council biosecurity officers.

Among the 417 individual and group visitors to the Allan Herbarium in 2013 were DOC tier one field staff and regional council biodiversity and biosecurity staff who attended our plant identification training sessions. In addition to workshops on the identification of weeds and indigenous species, we provided one-on-one training for flora specialists.