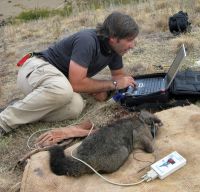 Data being downloaded from a tracking collar on an anaesthetised possum

The remarkable success of ‘community conservation’ initiatives across New Zealand, particularly the more than 70 pest-managed or predator-free mainland sanctuaries, has helped spark public interest in the concept of a Predator-Free New Zealand (PFNZ).

Pest and predator control at these locations has rejuvenated native plant and animal life at and around the protected areas, and public awareness of these achievements has fuelled interest in the more audacious goal of PFNZ.

None of these sanctuaries employs researchers so Landcare Research scientists have been working with these restoration practitioners – including community groups, iwi, wealthy benefactors and private landowners – to provide answers to their myriad of questions about how best to control pests and restore native species.

We have assisted at both urban and rural sites, dryland areas to islands, and over a range of scales from the very small to the very large.

Integral to this support is our in-depth understanding of wildlife ecology and pest control. We have some of New Zealand’s foremost experts in native fauna and the behaviour and management of our most problematic pests: possums, mustelids and rodents. Our understanding of individual pest species, how they interact with one another, their impacts on biodiversity, and the best approaches for control has helped inform management at protected areas.

Since 2004 we have hosted the Sanctuaries of New Zealand website to share information and an annual workshop. Typically attended by about 100 people, the two-day workshops have highlighted the fact that most sanctuaries share the same challenges. The workshops have helped shape national pest research priorities and have been an effective forum for sanctuary managers to share information. At the 2013 workshop, sanctuary practitioners voted to form their own national legal entity – Sanctuaries of New Zealand Incorporated (SONZI) – although they were keen that Landcare Research continued to be involved.

“The support that sanctuaries have received from Landcare Research has been absolutely invaluable,” says SONZI Committee Member, Kara Prankerd. “This support and research work has significantly contributed to the success of our pest eradication achievements and restoration gains."

Landcare Research scientists have spoken at every workshop, providing expert talks on kiwi, kōkako, giant wētā, northern rata, robins, land snails, fungi, moths and butterflies. We have explained the best monitoring techniques for cryptic fauna such as lizards and invertebrates, and the genetic considerations for translocation success. We have also funded research into the social and economic sustainability of sanctuaries.

However our biggest contribution has probably been the broad front of pest control, of which PFNZ is only the latest iteration. This has included the biology of ship rats, mice and hedgehogs; control and monitoring strategies for possums, rodents and stoats; overcoming sub-lethal poisoning; landscape-scale conservation; multi-species pest interactions; and biodiversity outcomes of pest control at small and large scales.

With the high likelihood that pests will eventually reinvade a predator-free sanctuary we studied the behaviour of released rats at Maungatautari Sanctuary in Waikato. Rats captured outside the perimeter fence were fitted with radio tracking devices and released inside the sanctuary. The study showed that, unexpectedly, most rats climbed back out again, and that a prompt response to any rat incursion has a high likelihood of success for those that remain.

Our experts in native plants, birds and invertebrates have worked with sanctuary managers to closely monitor how these species respond to the exclusion of ‘the mammal mafia’. Our findings have bolstered the evidence base for restoration decision making.

In a key development for landscape-scale pest control, we are studying how small populations of native fauna in forest remnants on farms in the Maungaharuru-Tutira area of Hawkes Bay benefit from the proximity of several protected native habitat areas and some recent pest control on the farms. Kiwi, kōkako, robins and the Hawkes Bay tree wētā are under pressure when they move between the protected areas, so we will study the impact of the pest control, and the connectivity between the protected areas and the productive landscape.

The evidence is clear: when the wide range of community groups passionate about native flora and fauna restoration team up with the relevant territorial, conservation and research agencies, we can achieve real improvements in native biodiversity.