Welcome to our first quarterly newsletter! We hope our friends, colleagues, end-users, and the interested public will enjoy these research and technical snippets. ~ Phil Novis, editor.

The Chatham Islands are very important to New Zealand botany. Thirty-eight species, subspecies and varieties, including two monotypic genera (Embergeria and Myosotidium), are found only on the Chathams1. Origins and relationships of the Chatham Islands flora have been the subject of great speculation, with some suggesting its provenance from the northern North Island, and others the southern South Island, and over differing timescales. 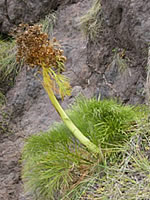 To test these ideas, DNA sequences were collected from 35 taxa endemic to the Chatham Islands and from their close relatives elsewhere2. The closest relatives of many of the Chatham Island endemic species – for instance, Aciphylla dieffenbachii (right) and species of Hebe – were revealed as widespread and common species that occur throughout the South and/or North Islands, rather than occurring just in the confined regions previously suggested. This is consistent with the west wind drift from the main New Zealand islands towards the Chathams: the data suggest 29 separate dispersals have occurred. However, there are exceptions to this general pattern. For instance, the Chatham Island endemic Sporodanthus traversii is most closely related to S. ferrugineus of northern North Island, and Brachyglottis huntii from the Chathams is closely related to B. stewartiae from the Foveaux Strait region.

Perhaps the most remarkable relationship is that of the monotypic Myosotidium hortensium, as its closest relatives are found in the Mediterranean! In this case, very long-distance dispersal seems to have occurred successfully. Dispersal of plants to the Chatham Islands has therefore been frequent and very complex.

When did these dispersals occur? The rate of change of DNA sequences over time can be used in combination with fossils to estimate the dates at which the Chathams species diverged from their relatives (and hence when dispersal occurred). Four taxa seem to have arrived >3.5 million years ago (Mya), with many further taxa dispersing <2.4 Mya. These figures coincide with the appearance of the Mangere Islands by eruption in the Chathams 4.0–6.0 Mya, and further land emergence between 2.0 and 3.0 Mya. Hence, the Chatham Islands flora is relatively young.

Origins of Pleurophyllum, a subantarctic megaherb

Megaherbs are a group of herbaceous flowering plants restricted to the Subantarctic Islands. As their name implies, they have large leaves and flowers, the latter often unusually coloured. The megaherbs, and other distinctive flora of the Subantarctic Islands, might include some of the last remaining vestiges of a once-diverse Antarctic flora. These plants may still retain distinctive features of their ancestors. Pleurophyllum is an iconic example, and the subject of our recent evolutionary studies. 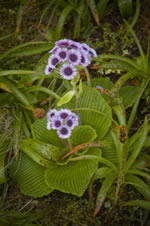 The genus Pleurophyllum includes three species restricted to Auckland, Campbell, Antipodes, and Macquarie Islands. In some areas on Campbell Island, P. speciosum (right, photo by S. Wagstaff) is the dominant life form. Its broad, leathery, pleated leaves form an enormous rosette, up to 1.2 m across. Its spectacular flower heads, about 6 cm in diameter, are arranged on branching stalks about 60 cm tall. Flower colour varies, perhaps due to differences in soil minerals or acidity, from bluish pink to pink and even white. Pleurophyllum hookeri and P. criniferum, which are often found together, lack the colourful ray florets of P. speciosum but are similarly robust plants with maroon disk-shaped florets on tall flower stalks. These two are distinguished by their leaves, which are narrow, pointed, silvery, and erect in P. hookeri, but broad, greenish, and low-lying in P. criniferum.

Our molecular analyses1 suggest that Pleurophyllum survived episodes of Pleistocene glaciation in the subantarctic islands and that its sister species dispersed northward to mainland New Zealand in response to glacial advance. The closest relative of Pleurophyllum was Damnamenia – another Subantarctic endemic. These species emerged as sister to a group of olearias that are restricted to New Zealand and likely originated in the Subantarctic islands, but diversified in a northerly direction to mainland New Zealand and the Chathams. As in the Chatham Islands study, we estimated divergence times using DNA evidence, with fossils and geological events as calibration points. The inferred age of 8.5–21.9 Mya for this lineage largely predates Miocene extinctions in Antarctica; hence the ancestor of these plants could have occurred on the Antarctic continent. Recent diversification in this group occurred between 2.2 and 9.5 Mya, corresponding closely with episodes of glaciation in New Zealand. These plants may face an uncertain future, as the fragile Subantarctic Islands are vulnerable to climate change, ecotourism and invasive introductions. 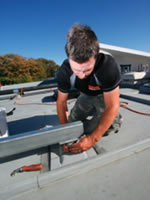 A new temperature and humidity control system is being installed (right, photo by T. Fraser), with work scheduled to finish 30 June 2012. Temperature and humidity are critical variables for the long term storage of herbarium specimens, with optimal ranges of 17–19.5°C and 35–50% respectively, to control insect reproduction and fungal growth. Data collected from the vaults show that they have not been meeting this standard.

Chubb Building Services and their subcontractors will effectively seal the vaults to uncontrolled outside air, the office system will be separate from the vault system, and each vault will be sealable from the others in case of flood or fire. New drainage is being installed to mitigate the risk of flooding following sprinkler activation. The number of specimens in the Allan Herbarium is continually increasing, so allowance for future expansion of the vaults is being made in the design of the new system. The result will be a much better environment for plant specimens, visitors, and staff.