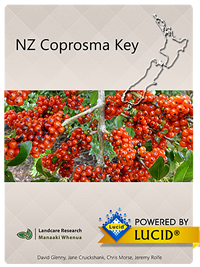 A new Coprosma app is the first of several LucidMobile identification apps being developed in New Zealand for smartphones and tablets (Android and Apple (iOS) formats). The NZ Coprosma Key app extends the accessibility of the online Java-based Lucid key for PCs and Macs developed by David Glenny, Jane Cruickshank, Chris Morse and Jeremy Rolfe.

Coprosma is a large, diverse and important genus. The interactive key enables users to identify any of the 53 species of Coprosma currently recognised in New Zealand. The key is designed for those with some experience in plant identification and who can recognise the genus. The key is supported by a factsheet for each species and 500 images of flowers, fruit, leaves and other characters. Each factsheet provides all the information needed to verify the identification. All parts of the key are built into the app so once downloaded onto a smartphone or tablet it can be used in the field where there is no Internet access.

The Coprosma app is publicly available on the Android Google Play Store and Apple’s iTunes. It is free to download.

Other LucidMobile plant identification apps under development at Landcare Research include keys for native and naturalised grasses, native orchids, flowering plant genera and weeds of New Zealand. These will similarly draw on the Lucid data driving the online versions on our website. Murray Dawson is leading the project, in collaboration with Identic, the Lucid software identification and diagnostic developers in Australia. As a result of this dialogue, Murray has been appointed to their informal Advisory Group, which should help influence the ongoing development of this class-leading identification software.

Funding for the five apps, including the NZ Coprosma Key, was provided by the New Zealand TFBIS  Terrestrial  & Freshwater Biodiversity Information System Programme.

Resources available at the Allan Herbarium

Staff of the Allan Herbarium create and maintain a number of information sources. These include:

Scientific Names. A list relevant to the New Zealand flora is maintained in the Plant Names Database. This includes information on accepted and vernacular names, origin and occurrence, and associated literature. It is made accessible, along with selected specimen data, via the Ngā Tipu o Aotearoa website as a searchable resource and as published reports (links accessible on home page).

Floras. There is an active research programme producing the next generation of a Flora of New Zealand – the ‘eFlora’. This programme aims not only to provide new taxonomic treatments, but also to deliver this research in a variety of formats. To date this information is available as general, weed and/or image gallery profiles, and the taxonomic treatments as PDF documents via the eFlora website.

In addition to the eFlora, the older, hard-copy volumes of the New Zealand Flora series have been converted to electronic format. These are available on the Flora of New Zealand Series website, and descriptions are also included in Ngā Tipu o Aotearoa and the eFlora where appropriate.

Specimen Data. There is an active programme to capture the primary data from herbarium specimens (e.g. locality, collectors, identification) and to photograph significant specimens (e.g. type specimens). This information is made accessible via the Systematics Collection Data website, along with specimen and culture data from the other biological collections curated by Landcare Research. 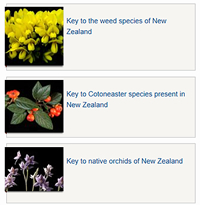 Identification Keys. In addition to the dichotomous keys included in the Floras, staff have developed a number of interactive identification keys. These include keys to flowering plant genera, Coprosma, grasses, weed species, Cotoneaster and orchids.

In addition, eFlora treatments of 19 families, including representatives of mosses, ferns and lycophytes, and seed plants have been recently published. These can be found at http://www.nzflora.info/publications.html.