Bryaceae eFlora treatment submitted, and Meesiaceae published. A taxonomic treatment of the moss family Bryaceae drafted by Allan Herbarium staff member Allan Fife has recently been submitted for publication as part of the eFlora of New Zealand series. The Bryaceae are a very large and cosmopolitan family with a well-deserved reputation for taxonomic intractability. A total of 30 species in three genera are accepted for New Zealand. The publication of this family treatment is a milestone towards the completion of the Mosses of New Zealand eFlora, and follows publication in March of the family Meesiaceae.

A milestone for The Friends of the Allan Herbarium. A group of volunteers was formed in 1992 to support some of the tasks undertaken at the Allan Herbarium, such as mounting specimens and entering data. Nineteen people have filled this role over the years, with six currently serving. In an era of constrained funding their contribution to the collections has been immense: our longest-serving Friend, Elisabeth Ross, has continued for 23 years, mounting over 21,000 specimens in the process. Congratulations to Elisabeth, and a vote of grateful thanks to all our volunteers! 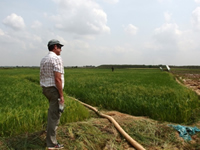 Kerry Ford, Allan Herbarium botanist, working in Cambodia. Kerry has recently completed a contract with the Ministry of Agriculture, Forestry & Fisheries for the Kingdom of Cambodia, in association with Trevor Crosby (entomologist) and Eric McKenzie (plant diseases specialist, photographed at right by Kerry in a Cambodian rice paddy infested with Cyperus iria). This work was funded by the Asian Development Bank and contributed to a wider project to improve Sanitary and Phytosanitary standards in the Mekong Region. The project involved two one-month assignments, in July 2014 and May 2015, based at the General Directorate of Agriculture in Phnom Penh. The aim was to compile pest lists for maize and rice crops to meet international export standards and improve Cambodia’s access to markets. Apart from a small amount of field work, most time was spent with staff, teaching diagnostics in the respective taxonomic groups, techniques of specimen preservation, and compiling lists of pests from our identifications and previously published records. The lists were presented at a workshop attended by the Ministry of Agriculture, Forestry & Fisheries staff and seem to have been well received.

Non-vascular plant collections in the Allan Herbarium are about to grow and strengthen, thanks to a new and exciting collaboration between Landcare Research and the Department of Conservation (DOC). Over recent years, DOC has been progressively implementing its National Monitoring and Reporting programme. The four goals of the programme are:

The programme is split into three “tiers”, with Tier 1 being broad-scale monitoring (see the link below). Tier 1 builds on an existing national infrastructure to measure carbon. It involves the regular assessment of vascular and non-vascular vegetation, bird communities and selected animal pests at randomly selected sites located on an 8 x 8 km grid pattern across Public Conservation Land. New Zealand now has its first opportunity to extend current knowledge of non-vascular species distributions using an objective assessment of sampling sites on the 8 X 8 km grid. This work will augment the targeted sampling undertaken by species specialists.

The presence of non-vascular plant species at each site is completed by systematically searching a 20 x 20 m plot by substrate (e.g. litter, coarse woody debris, epiphytes). Non-vascular collections include all non-crustose lichens, liverworts, hornworts and mosses. These collections are identified by Kelly Frogley, a developing non-vascular plant botanist based at DOC in Christchurch, supported and mentored by David Glenny at Landcare Research, Lincoln (both feature in the image at right). Kelly will work in the Allan Herbarium for one day a week over the next year with the primary goal of accessioning Tier 1 non-vascular plant samples.

The Allan Herbarium will benefit from the inclusion of physical records of new, endemic, rare and/or threatened species, as well as increased certainty of current species identifications. These in turn will inform future updates to the NZ Threat Classification System.

In addition, eFlora treatments of 7 families, including representatives of mosses, ferns and lycophytes have been recently published. These can be found at http://www.nzflora.info/publications.html. Examples include: