Flora of the Cook Islands submitted for publication. This major work was compiled by Bill Sykes, research associate at Landcare Research and former DSIR botanist.  Bill has collected on the Islands periodically since the 1980s, and has written this contribution since his retirement in 1992, in addition to undertaking other voluntary work at the Allan Herbarium. Thank you and congratulations Bill, and watch this space!

New Zealand freshwater and brackish diatom types available online. Thanks to funding from TFBIS1, type specimens of freshwater and brackish diatom species that were first described from New Zealand material have been imaged and digitised (see Plant Press Issue 5). This required light and electron microscopy of specimens, loans from overseas herbaria, and permission from these and journal publishers to post material online. The results are now available. 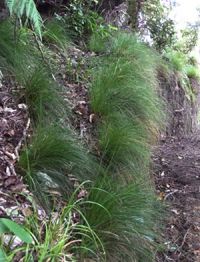 The 34 species of New Zealand Uncinia (known colloquially as “hookgrasses”, although they are technically sedges) have been transferred to Carex, making this genus the second largest indigenous vascular plant genus in New Zealand, at 112 species. This change in nomenclature reflects new knowledge of evolutionary relationships within and between the traditional genera of the tribe Cariceae. Uncinia is one of the few of these traditional genera that proved to be a coherent group in evolutionary terms, but the name cannot be retained because doing so would result in other genera definable only by their DNA sequences. Kerry Ford has contributed the resulting new names and combinations for the New Zealand plants, in collaboration with the Global Carex Group, in a publication1 that provides them for all 70 species of Uncinia. Applying the rules of nomenclature has resulted in the disappearance of some well-known names. Uncinia rubra becomes Carex punicea (also meaning red), and Uncinia divaricata becomes Carex edura (for hardiness in exposed alpine habitats). Some names have changed little. For instance, Uncinia banksii (right) has become Carex banksiana, squeaking in under the rules of the nomenclatural code in the interest of name stability. Carex erebus replaces Uncinia hookeri, the new name referencing the H.M.S. Erebus, the ship bearing J.D. Hooker during the Ross Antarctic expedition, in which he collected this species from the Auckland Islands. By coincidence this ship, famously lost with H.M.S. Terror in the Franklin Expedition of 1845 in search of the Northwest Passage, was discovered on the seafloor in the Canadian Arctic in September 2014 as the revision of Carex was being prepared. 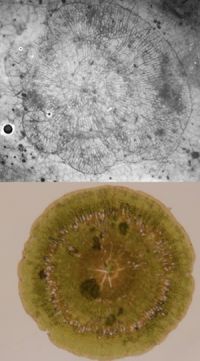 Species of Phycopeltis, aerophytic green algae in the order Trentepohliales, are rather poorly known in contemporary terms. A well-preserved fossil 35 million years old is therefore remarkable. This specimen has been found in material unearthed and prepared by University of Otago researchers Daphne Lee and Jennifer Bannister, who collaborated on a publication1 with Phil Novis from the Allan Herbarium and Fabio Rindi, an international expert on the genus, from Italy. Most modern species of Phycopeltis are found on the leaves of embryophytes, and are technically filamentous; however, the filaments fuse to form prostrate disc-like or ramulose thalli. Sexual reproduction occurs through the release of swimming gametes liberated from gametangia within the thallus, whereas asexual reproduction involves sporangia borne above the thallus on a stalk.

The few earlier reports of fossil Phycopeltis have all been re-interpreted as fungal shields due to their small size, deep pigmentation, and odd cell shapes; however, the new fossil (right, upper) is much larger, non-melanised, possesses strictly linear cells, and contains structures that strongly resemble the gametangia of modern material. It is thus the only reliable fossil of the genus known. It was found on an angiosperm leaf of unknown identity, and appears intermediate in form between several modern species. The arrangement of putative gametangia in concentric rings resembles P. novae-zelandiae (right, lower), but the larger cells are reminiscent of the species P. expansa, reported as widespread in New Zealand by the only substantial work on the subject2.

This specimen joins a handful of other fossils of a similar age placed in the genera Trentepohlia and Cephaleuros as the only known ancient representatives of the order Trentepohliales. The evolution of this group is puzzling: it is a strictly aerophytic group immersed in a class of predominantly marine taxa. Fossil finds are therefore of striking interest.

In addition, eFlora treatments of nine families, including representatives of mosses, ferns and lycophytes, have been recently published. These can be found at http://www.nzflora.info/publications.html. Examples include: