Welcome to our second quarterly newsletter! We hope our friends, colleagues, end-users, and the interested public will enjoy these research and technical snippets. ~ Phil Novis, editor. 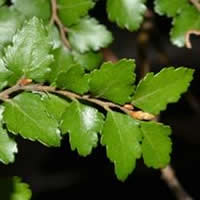 New Zealand has four species of southern beech (Nothofagus): N. fusca (red beech, right), N. menziesii (silver beech, right), N. solandri (black and mountain beech) and N. truncata (hard beech). Silver beech is the most botanically distinct of the four. It is classified in a different subgenus within Nothofagus to the other three, and has its closest relatives in Australia and South America. The three remaining species form a closely related group and botanists have long recognised that hybrids occur among them in nature, particularly N. solandri × N. fusca and N. solandri × N. truncata. Allan Herbarium scientists, along with Landcare Research plant ecologists, have been examining genetic variation among black, hard, and red beech using a newly developed set of DNA markers. In doing so, we have confirmed that the previously documented hybrids occur in the wild, and also found N. fusca × N. truncata,which is difficult to recognise because these two species have very similar serrated leaves.

Somewhat surprisingly, genetic data do not support the idea that red and hard beech are more closely related to each other than they are to black beech, despite their similar appearance. Within N. solandri DNA data suggest that there is some genetic differentiation between black (N. solandri var. solandri) and mountain (N. solandri var. cliffortioides) and that difficulties many botanists experience in classifying trees from some areas may be due to hybridisation between the two. Although more data are needed, these results tend to favour the view of some botanists that black and mountain beech should be treated as distinct species. 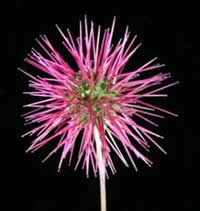 A major obstacle for experienced and inexperienced botanists alike is how to identify an unfamiliar flowering plant to family or genus. Traditionally two methods were used, neither particularly easy.

The first was to use a key to families in a volume of the New Zealand Flora series, followed by a key to genus within the family. This method usually requires very complete plant material, with flowers or fruit or both. Family keys for flowering plants are the most difficult keys to operate, being long and relying on technical characters like placentation (position of ovules within the ovary).

A new interactive key is now online that shortcuts this process. It takes you directly to any of the 1085 flowering genera that are wild or casual in New Zealand. The key does not require you to identify the family first, but the structure of the key will remind you of the families.

The key largely uses simple characters like division of leaves, leaves opposite or alternate, leaf length and width, presence of hairs, flower colour, and fruit colour. Flowers or fruit will certainly help, but the key can be used without. Leaf characters alone may take you to a number of genera, which can be discriminated using the images provided. There are 7000 of these, about 7 per genus.

This key has been funded by TFBIS (Terrestrial & Freshwater Biodiversity Information System), administered by the Department of Conservation. Work remains to fill gaps in the image set and to improve the key using feedback from users.

Please try the key, and let us know how you find it. Find the key at www.landcareresearch.co.nz/resources/identification/plants/flowering-plants-key, or easier, Google: flowering genus key.

Contact David Glenny at glennyd@landcareresearch.co.nz with comments and corrections. 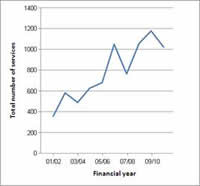 We receive up to ~1000 plants for identification per year (see graph below). Our clients are members of the general public, regional authorities and other local bodies, the Department of Conservation, commercial companies (e.g. nurseries, seed companies, animal health laboratories), research and forensic institutes and MAF (Quarantine Service, Field and Horticultural Officers). The client contact for the Plant Identification/Information Service is Ines Schönberger, who passes specimens on to the appropriate specialist. The number of services provided has steadily increased over time (see graph). Services include:

One-off plant identifications for the general public are free. Fees are incurred for services to commercial and agency users. An annual fixed fee is recommended if the service is used frequently (e.g. many regional authorities have annual contracts).