Vascular type collection images available: As part of the Global Plants Initiative, we have imaged our Vascular Type Collection. High quality images (1139 in total) of our type specimens have been published on the JSTOR website (http://plants.jstor.org) and will be available on our Systematics Collection Data website shortly (http://scd.landcareresearch.co.nz).

New research on Helichrysum published: Helichrysum is one of the largest genera of flowering plants, with some 600 species found mostly in Africa, Europe and Asia. A number of related genera, totalling about 200 species, are not clearly separable from Helichrysum, and it has been suggested that they should be included in it. The new study was led by Mercè Galbany-Casals from Autonomous University of Barcelona, who has worked at the Allan Herbarium, and also involved our own Rob Smissen. It is the most comprehensive study to date, sampling 167 species, confirming that Helichrysum is paraphyletic and supporting a previous hypothesis that a number of clades within the genus have polyploid origins. The authors point out that further enlarging Helichrysum to avoid paraphyly would require hundreds of new names for species currently treated in other genera and would make the genus even more unwieldy. They suggest maintaining a paraphyletic Helichrysum at least while possibilities to split it are explored.

Armstrong Collection gifted to the Allan Herbarium: The Christchurch City Council unanimously passed a resolution to approve gifting of the 2607 Armstrong Collection specimens to the Allan Herbarium. For the last 30 years this scientifically important and historically interesting collection has been on indefinite loan to us. However, this status prevented curation, databasing, and digitisation of the material. Now that the gifting process is completed we can finally maintain and utilise one of New Zealand’s first native plant collections, which also contains important weedy and cultivated records. The collection is currently being imaged by the Friends of the Allan Herbarium. Once complete, we will use the ALA Volunteer Portal to get the label information of these images digitised through crowdsourcing. Finally the digitised label data will be checked by Allan Herbarium staff and will then be available, along with the images, through the Systematics Collection Data website. 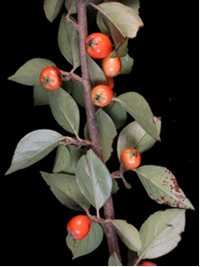 Cotoneaster is an ornamental shrub genus common in New Zealand gardens. None of the species are native to New Zealand; most have their wild origin in the Chinese Himalaya. Most species in the key are known from the wild, a number of species are troublesome weeds, and one is banned from sale (Cotoneaster simonsii, right). Cotoneasters are frost-hardy, some will grow under native forest canopies, and their fruit is spread by birds. These features make them invasive weeds in native forest and scrub and in non-native agricultural ecosystems.

The number of naturalised and casual species in New Zealand has increased from 7 to 17 since the Flora Volume 4 treatment written by Bill Sykes in 1988. Because of the importance of this invasive weed genus, Cotoneaster is being revised by David Glenny for an online interactive Lucid key, and an online eFlora treatment. A first draft of the online key is now available at http://www.landcareresearch.co.nz/resources/identification/plants/cotoneaster-key. The key includes cultivated species, as will the eFlora treatment, because some of these are likely to naturalise in the future.

Some names used in the key will be unfamiliar to users of Flora Volume 4, because there have been important publications on the genus since 1988. The main two are Jeanette Fryer and Bertil Hylmo’s book Cotoneasters published by Timber Press in 2009, and the 2003 Flora of China treatment of Cotoneaster by Lu and Brach (available online at http://flora.huh.harvard.edu/china/PDF/PDF09/Cotoneaster.PDF). 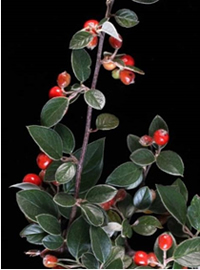 Fryer and Hylmo provide keys and descriptions for the whole genus and recognise 361 species worldwide. In contrast, Lu and Brach describe 57 species and suggest that there are about 90 species worldwide. These two works take very different approaches, and show that the species composition of the genus is controversial. The main reason is apomixis, occurring in about 90% of species. That is, most species (such as C. franchetii, right) self-fertilise, with the result that the apomictic lineages are genetically identical from one generation to the next. From a horticultural perspective, these lineages are all of interest and Fryer and Hylmo recognise them as species, while Lu and Brach have recognised broad species that are recognisable in the wild in China. An approach closer to that of Fryer and Hylmo has been taken for the interactive key, because it seems most useful to recognise apomictic lineages as species that will have their own distinctive distributions and ecologies in New Zealand. This results in lineages being separated by differences that may sometimes be very small. The online key consequently has many illustrations of each species to make identification easier.

Muralidhar A, Novis PM, Broady PA, Collings DA, Garrill A 2013. An estuarine species of the alga Vaucheria (Xanthophyceae) displays an increased capacity for turgor regulation when compared to a freshwater species. Journal of Phycology 49(5): 967–978.