A new-look eFlora: The electronically-based Flora of New Zealand has had a makeover, and now has a new look and an improved browser for filtering and accessing information.
See http://www.nzflora.info/Index.html.

More about apps! According to a recent Research New Zealand survey, 48% of New Zealanders now own a smartphone, and these are becoming their device of choice. As a consequence, smartphone and tablet applications (“apps”) are increasingly popular. As mentioned in the last newsletter, Murray Dawson will redeploy five of our interactive plant identification keys (flowering plant genera, grasses, weeds, native orchids and Coprosma) as apps over the next two years. Using the new Lucid Mobile platform, the app versions will provide cutting-edge solutions for identifying plants directly in the field, including invasive species and threatened native plants. Best of all, thanks to funding from TFBIS1, the apps will be free to download from the app stores!
1Terrestrial and Freshwater Biodiversity Information System, administered by the New Zealand Department of Conservation

Centrolepis glabra (Centrolepidaceae), a new indigenous species for New Zealand, and the identity of C. minima 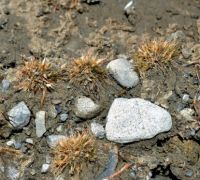 A new indigenous species, Centrolepis glabra, has been recorded for the New Zealand flora. It forms minute herbaceous tufts that grow in and around kettlehole tarns in eastern South Island inland basins and at a few sites in sheltered bays of Lakes Te Anau and Manapouri.This species is also known from Australia but has previously been overlooked in New Zealand.

Centrolepis glabra was discovered during fieldwork for an eFlora treatment of the plant family Centrolepidaceae. Rather than being an entirely new discovery, it has consistently been misidentified as C. minima in the past. A close examination of type material reveals that C. glabra and C. minima are distinct, and furthermore that C. minima is actually conspecific with the New Zealand species C. pallida, with the latter name having priority (i.e. it was used first for material now judged to be the same, so according to the International Code of Nomenclature it must be retained). Centrolepis pallida is found in subalpine and alpine bogs and turfs, and on montane shores of the southern glacial lakes.

On the main islands, C. pallida is most common in the southern South Island, although a few collections have been made from West Coast tarns: near Mt Priestley in the Paparoa Range, and another from the Glasgow Range. The type locality of C. minima was the shores of Lake Brunner, Westland; this habitat is similar to the shores of the southern glacial lakes, from which C. pallida has often been reported.

This is a new website hosted by Landcare Research, aimed at helping members of the community answer three questions:

Freshwater algae are natural, essential, and often beautiful inhabitants of lakes, ponds, wetlands, and streams. However, they can also cause problems when they occur in abundance, resulting in toxin production or unsightly growths, and may be obvious indicators of contamination. This website will be useful to anyone interested in observing and identifying algae, and who has access to a compound microscope (even a very basic one). It is aimed at the level of community groups with little previous knowledge, such as school classes or volunteer groups. The identification key, with illustrated glossary, will enable you to detect nuisance algae, such as potentially toxic cyanobacteria or Didymo, and will help you explore this fascinating – and incredibly diverse – microscopic world.
http://fwalgae.landcareresearch.co.nz

This web resource was initiated by Stephen Moore, a Landcare Research entomologist, aquatic ecologist, photomicroscopist and enthusiastic communicator of science. Sadly, Stephen died in 2013 after a long battle with cancer; ongoing work on the website has been continued by Phil Novis.