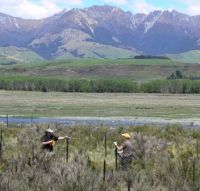 Invasive plants can disrupt entire ecosystems and their economic impacts are a significant burden on the New Zealand economy. Biocontrol can provide permanent cost-effective weed control, but has a variable and unpredictable success rate.

We developed a system that ranks targets according to: (1) weed importance (determined by a survey of Department of Conservation (DOC), regional and district council and unitary authority priorities); (2) the predicted cost of implementing a biocontrol programme (e.g. targeting weeds that have already been successfully controlled by overseas agencies is cheapest, due to greatly reduced development costs); and (3) the predicted impact of biocontrol.

A major innovation was the development of a framework for predicting the impact of biocontrol. Analysing a database of the quantitative impacts of biocontrol against 80 weed species worldwide revealed that biocontrol impact depends on (1) whether or not a weed is also a major weed in its native range; (2) its mode of reproduction (sexual or asexual); and (3) the ecosystem (aquatic/wetland or terrestrial). A major impact of biocontrol appears almost guaranteed against weeds with the best combination of traits (aquatic, asexual species that are not major weeds in their native ranges), whereas most programmes against targets with the worst combination of traits have failed.

Data on each of the factors that influence biocontrol cost and impact were used to rank the top 50 most important New Zealand environmental weeds (determined by the stakeholder survey). The National Biocontrol Collective (an alliance of DOC, regional, district/city council and unitary authority stakeholders, who pool resources to fund biocontrol projects) used the prioritisation system in its deliberations last year on which projects to fund in 2012/13. This study also inspired the creation of a technical advisory group (comprised of representatives from several councils, DOC, and the Ministry for Primary Industries) to explore the potential for biocontrol of key aquatic weeds in New Zealand.

It is too early to demonstrate impact. However, by predicting the potential cost and feasibility of biocontrol, we have provided a better basis for deciding what projects agencies fund in the future. This will also help ensure projects are adequately resourced and that agency expectations are appropriate. In the future, it should be possible to demonstrate that adoption of this prioritisation framework has greatly improved the cost-effectiveness of weed biocontrol in New Zealand.