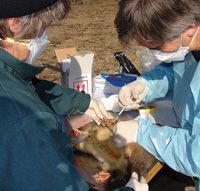 The number of TB-infected cattle and deer herds in New Zealand has dropped dramatically, from over 1700 in 1994 to just 58 in March 2012. This reflects local elimination of TB from possums as a result of sustained and intensive regional-scale possum control, to the point where TB is probably absent from large areas that contained infected possums, but it is difficult to confidently declare areas free of TB without conducting surveillance of TB in wildlife (especially possums). However, such surveillance can be expensive, creating an urgent need for an objective and affordable TB surveillance system.

Over the last few years, Landcare Research, in collaboration with the Animal Health Board (AHB) and others, has developed a conceptually new and highly quantitative framework for objectively assessing the probability that TB has been eradicated from a specific area (Anderson et al. submitted). The framework combines predictions from a sophisticated model of TB in possums with multiple sources of spatial surveillance data, including a radically new approach to use of traps and other possum detection devices as a way of estimating the likelihood that TB is still present.

The new approach has been formally adopted by the AHB, the national agency mandated to manage TB in New Zealand on behalf of the agricultural industries and government.

The new framework has enabled the AHB to declare TB freedom over about 40 000 ha in 2012, and it is expected the area declared TB free will accelerate rapidly in the next few years. This is a crucial first step toward their goal of eradicating TB from 2.5 million hectares over the next decade or so. It is likely that the new ability to identify where any risk of TB persisting is highest will enable AHB to target future work in a much more sophisticated and accurate way.

Longer term, achieving local and regional eradication of TB will eventually substantially reduce the annual cost of TB management (currently $84m p.a.) and ensure that there is no likelihood of any resurgence in the threat that TB once posed to current market access for these industries.