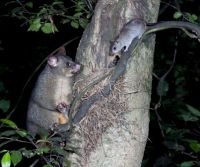 Invasive pests remain the most immediate threat to native birds, reptiles and invertebrates. While the Department of Conservation (DOC) manages pest animals on high-value Crown land, the majority of the country is riddled with uncontrolled populations of predators including ferrets, stoats, feral cats and rats. These animals are highly mobile and have the ability to use both native forest and the agricultural and urban areas that surround them. They co-occur and interact in complex ways, so the ecological consequences of their management are not always anticipated.1

Our researchers have been investigating this in a series of projects: (1) The benefits of spatially extensive pest control for native invertebrates; (2) Landscape-scale approaches to invasive species management; and (3) a collaborative project with stakeholders in Hawke’s Bay investigating the biodiversity benefits of wide-scale predator control.

Results from Project 1 have shed light on the interactions among stoats, rats, mice and possums over extensive areas of mainland New Zealand. The research has been published in the journal Ecology Letters,1 and was subsequently reported as a research highlight by the prestigious journal Nature.2 In a follow-up paper in Conservation Biology3 the research team showed that pest control at large spatial scales can increase populations of invertebrates such as iconic tree weta, a preferred invertebrate prey item of rats.

Project 2 is identifying ways to move beyond conserving individual sites to creating interconnected networks of conservation areas. Better knowledge of the spatial pattern of benefits, and when to target specific priority conservation sites or the land between sites, is key to optimising the design of reserve networks and the targeting of invasive species management.4

In Project 3 we are applying the recent learnings from the first two projects. Together with DOC, Hawke’s Bay Regional Council, and community groups, with support from the Robertson Foundation Aotearoa, we are applying ‘metapopulation’ management over a scale of thousands of hectares to determine if predator control in the pastoral landscape is sufficient to boost native species and their use of the network of native forest remnants.5

Across New Zealand there is a huge groundswell of interest in pest control for biodiversity protection, and community groups are complementing the work of government agencies in achieving conservation benefits in their local areas. Much of this work is being shaped by the results of our invasive species research.

Through our understanding of the control of multiple species, the Animal Health Board now routinely aims to target both rats and possums together in aerial control operations. Also, our scientifically significant work has added to knowledge on management of invasive species, and more importantly, their impacts on native biota. Earlier underpinning research has been influential in many of New Zealand’s island and mainland pest management success stories, and is a key reason that the concept of a ‘Pest-Free New Zealand’ is being discussed today. Landcare Research’s expertise is also in demand abroad. We provide research and consultancy services overseas through Invasive Species International and the Invasive Animals CRC in Australia.