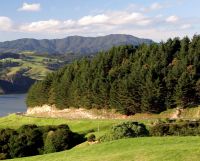 How fast can different forests grow? And will they grow faster or more slowly in future? These are important questions both in terms of current and future wood supply for the forestry industry and for assessing the potential of our forests to sequester carbon to mitigate the effects of climate change. In the past, such assessments used empirical modelling approaches to provide growth estimates, but such modelling approaches have limited scope and reliability.

In collaboration with NIWA and Scion, we used, for the first time in New Zealand, a physiologically-based modelling approach to model the wood growth and carbon storage of radiata pine. The model had originally been developed in Australia1, 2 where it had been applied to pines1, 3, 4, 5 and native forests.6, 7 The generic structure of the model, and its solid base of known underlying scientific principles, allowed its application to these diverse vegetation types. It has been tested against a wide variety of measurements ranging from short-term daily water and CO2 exchange rates to growth rates assessed and measured over years to decades.

The New Zealand work allowed testing against unique datasets, particularly growth rates from across the country. This tightly constrained the environmental drivers of growth and carbon storage and specific plant-internal relationships.8 The work provided a physiologically-based description of pine productivity under current conditions in New Zealand9 and the likely response to climate change.10 It showed that pine stands can grow by about 10 tC ha–1 yr–1 in the fertile, warm, wet western half of the North Island but by only 2–4 tC ha–1 yr–1 in Central Otago and Canterbury.9

It showed that pine growth is often temperature limited, with optimal growth occurring under the highest temperatures found in New Zealand. With climatic warming, stands are therefore likely to grow faster in the cooler parts of the South Island. In contrast, growth is likely to be reduced in the north and in the drier regions on the east coast of both islands, where any warming can intensify water limitations. However, even these limitations could be overcome through increasing CO2, provided plant responses will be as strong as currently seen in experimental observations.

The work has only recently been completed, so has yet to be adopted by the forest industry and policymakers. The growth estimates have been used in national-scale assessments of ecosystem services and forests.11, 12, 13 The model is used by Scion in MPI-funded work for assessing the time course of soil-carbon changes after land-use change and in work funded by the NZ Agricultural Greenhouse Gas Research Centre for modelling gas exchange of pastures under different management regimes. The model has also been used for modelling the growth of kānuka/mānuka stands in other MPI-funded work.

Physiologically-based modelling allows more accurate estimates of growth and carbon exchange of forests. Having more reliable growth estimates under both current and future climatic conditions will allow the industry and policymakers to make better-informed planning decisions.