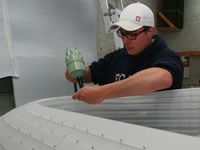 In 2006 the Ministry of Foreign Affairs and Trade identified an emerging threat to New Zealand's primary exports. Export markets for New Zealand-grown apples and kiwifruit, valued at $1,029.6 million fob (2006 figures; currently 1,467.4 million fob) (1), were at risk of declining because of speculation about the carbon footprint in delivering New Zealand-grown products to the Northern Hemisphere and a consumer shift to locally grown domestic crops. “Food miles” became (and is still) a major factor in securing markets for supply of fresh produce to consumers, particularly in the EU (Saunders & Barber 2006).

Faced with the need to respond to significant and increasing pressure in key export markets for information on the environmental credentials for primary products (2), and in particular carbon footprint information, the NZ Government invested in LCA research to demonstrate the low environmental impact of New Zealand's primary produce. The Ministry of Agriculture (MAF) launched its New Zealand Greenhouse Gas Footprinting Strategy for the Land-Based Primary Sectors research programme (MAF 2007). In parallel, the Ministry of Economic Development ran an Eco-verification programme, which extended LCA concepts beyond the agricultural sector to the tourism and seafood industries (MED 2007a, b, 2008).

Though the financial benefits of LCA are considered by many industries to be commercially sensitive information, there is no doubt they are considerable. In addition to cost savings, LCA provided strong information to address “food miles” challenges in export markets. Landcare Research's kiwifruit study (Mithraratne et al. 2008) provided an estimate of the industry's carbon footprint at a time when the international media, governments and retailers were demanding to know the carbon footprint for New Zealand-grown kiwifruit consumed in the UK. Providing this information dissipated any media speculation that could have damaged the Zespri brand or sales. Zespri was complimented by European media, non-Government organisations and retailers for being proactive in being forthcoming with the estimate of the kiwifruit carbon footprint, ahead of any information from competitors.

Footprinting for the pipfruit industry has been reported in the Orchardist (Sept. 2009) and presented at the Annual World Pipfruit Growers' conference in the USA. Data have been used in a German TV documentary on carbon footprinting and fresh produce from New Zealand. The footprinting data have been important in securing the existing markets and retaining favoured-supplier status. Zespri and others have been able to show that they are proactively ahead of consumer concerns and therefore managing the risks of overseas retailers for them.

Zespri has subsequently built on Landcare Research's LCA research, and with co-funding from MAF have contracted carboNZero to produce an LCA-based Product Category Rule (PCR) for kiwifruit. (A PCR is an ISO-based mechanism for defining an internationally standardised approach to measuring the environmental impacts of a particular product category (i.e. kiwifruit) based on an LCA approach.) Japan, for example, is introducing a product carbon labelling scheme based on the PCR mechanism. Landcare Research's work for Zespri will provide the company with a “first mover” advantage in the changed Japanese market. MAF and Zespri have currently engaged Landcare Research as the lead researcher in the emerging area of water footprinting, to determine its implications for kiwifruit using an LCA approach (Hume & Coelho 2010).

Between 2007 and 2010, Landcare Research has employed between 2 and 3 full-time researchers, plus between 3 and 4 full-time subcontracted researchers. The work has been funded by MAF, Sustainable Farming Fund, industry, FRST and Landcare Research's Capability Fund. A total of $2 million was spent on the seven industry studies.

1. For 2006 see www.hortresearch.co.nz/index/page/498 and for 2009 see www.plantandfood.co.nz/file/freshfacts-brochure-2009.pdf.
2. For example, the UK-based Carbon Trust/DEFRA and the British Standards Institute published the PAS 2050 (Publically Available Specification on Greenhouse Gas/carbon foot print measurement), based largely on the ISO LCA approach, in 2008.
3. LCA has been standardised in the ISO14040 series of guidance and standards.
4. Landcare Research scientist Jonathan King was a member of MAF's GHG Footprinting Advisory Group in 2007.