Securing a future for kiwi and kōkako

Kiwi numbers in the wild are halving every decade, with 95% of chicks being killed by predators before reaching adulthood. However in ‘managed areas' on New Zealand's mainland kiwi populations have been stabilised or are increasing.

Work by Landcare Research scientists has been instrumental in the turnaround for kiwi and the equally threatened kokako as this 2008 case study for the Crown Company Monitoring Advisory Unit (CCMAU) explains. 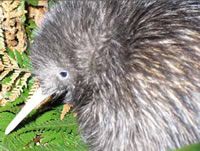 Landcare Research, in partnership with DOC and tangata whenua, has conducted research for almost two decades to remove the threat of extinction of kiwi and kōkako. As a result, kiwi numbers are now steady or increasing in managed locations, despite all six kiwi taxa still being classified as threatened and total numbers halving approximately every decade (Robertson 1996).

Kōkako, once near extinction, now exist in managed sites (MfE 2007) and numbers have doubled over the past decade to about 800 pairs. Kōkako have been restored by translocation to three North Island regions, and restoration to three regions of the South Island is currently underway.

The kiwi is without question a national icon, treasured by New Zealanders. It is the ‘brand' we have chosen both for ourselves and for our products (e.g. ‘Chinese gooseberries' grown in NZ). Kiwi are regarded by Māori as taonga, and over 150 1 companies currently trade using the name ‘kiwi'. A survey of attitudes to kiwi2 showed 87% of respondents felt saving kiwi should be a national priority.

Kōkako have served as a public symbol of what may be lost by logging native forests (MfE 2007). Kōkako's unique appearance and haunting call provide, for our national identity, elements that are ‘uniquely New Zealand' - the catch phrase of multi-million dollar marketing campaigns for New Zealand exports and for New Zealand as a tourist destination.

In New Zealand, Landcare Research, in partnership with DOC and tangata whenua, pioneered the adaptive management approach to conservation, in which scientists work with managers of endangered species to identify and manage causes of species decline. This approach is widely credited with inspiring intensive pest management for restoration of many species and ecosystems on the New Zealand mainland (e.g. DOC 1996; Saunders & Norton 2001), and overseas (e.g. Dunlevy et al. 2000), where species are endangered by loss of habitat and pressure from introduced predators.

The research has successfully addressed, for kiwi and kōkako, three national goals relating to indigenous biodiversity in New Zealand's Biodiversity Strategy: halting the decline of indigenous biodiversity; enhancing community and individual action, responsibility and benefits; and protecting iwi and hapū interests and strengthening partnerships in conserving and sustaining biodiversity.

Kiwi research, in particular, has engaged the general public in wildlife conservation in a ‘hands-on' way that has not been seen before. More than 60 community groups and hapū groups have begun kiwi recovery programmes in their neighbourhoods (community protection of kiwi habitat - 50 000 ha - now almost matches that managed by DOC - 70 000 ha) (DOC 2006).

Kiwi research has been supported by donations from the public and sponsors of almost $10 million3. Over time, the research will almost certainly result in the return of kokako to areas in which they have become extinct, and in kiwi recovering to former levels of abundance in many parts of mainland New Zealand.

An estimated 15% of the tourism industry's economic contribution involves nature-based tourism, in which ~$500 million per year is spent by international and domestic tourists visiting penguins, seals, dolphins, albatrosses, whales and glow worms4. Assuming kiwi are at least as attractive to tourists as each of these species, this suggests that tourism expenditure associated with visits to kiwi is around $90 million per year.

To further refine the tourism value of kiwi, we obtained and analysed data on visitor numbers to wildlife facilities in which kiwi are held in captivity. In 2006/07 over 300 000 visitors visited kiwi in wildlife centres in the Rotorua, Wairarapa and Canterbury regions. Visitors to kiwi represented between 3.5 and 10% of visitors5 to the regions, with associated total expenditure of approximately $64 million6. Expenditure on entry fees alone to two centres in which kiwi are the sole or major attraction exceeded $4 million - returning in a single year almost twice the total investment to date in Landcare Research's kiwi and kōkako research.

Kiwi research from 1992 to 2002 involved ~3.5 FTE per year, of which two were Landcare Research staff. The work received ~$1.2 million funding from the Foundation for Research, Science and Technology (FRST), matched by in-kind support from DOC (estimated at $500,000), the hapū of Waikaremoana (over $200,000), and donations from BNZ Save the Kiwi trust ($280,000) and charitable trusts (approximately $50,000). For the past five years the field programme has been run by DOC and Māori (4 FTEs). Landcare Research currently receives ~$50,000 per year funding from FRST for kiwi research.

Kōkako research from 19927 to 1997 was collaborative with DOC, who provided ~10 FTEs during the early research-by-management phase, and one kokako researcher from 1998 to 2003. Between 1992 and 2004, Landcare Research's personnel contribution averaged ~0.25 FTE, with ~3 FTE in casual field support, funded by ~$450k from FRST. Current research (0.05 FTE per year) is primarily consultancy.

2BNZ's Save the Kiwi trust conducted a survey of attitudes to kiwi in 2005. Referenced in DOC (2006)

3Contributions to date from public and sponsors, via BNZ Save the Kiwi Trust (DOC 2006)