Saving biodiversity and money: why biocontrol is so effective

In New Zealand one of the most successful biocontrol programmes undertaken to date has been against ragwort (Jacobaea vulgaris, previously Senecio jacobaea). Biocontrol uses the natural enemies of weeds to tame them to the point where no other control is needed. The ragwort flea beetle (Longitarsus jacobaeae) has reduced ragwort to low levels in many parts of New Zealand. More recently efforts have been made to release a plume moth (Platyptilia isodactila) in the remaining ragwort strangleholds where the flea beetle is not able to be effective, and it looks likely to be successful. Since the early 1990s, for a total cost of just under $1.5 million, the ragwort biocontrol programme has saved New Zealand dairy farms between $9 and $12 million every year (1). 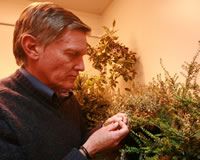 In New Zealand one of the most successful biocontrol programmes undertaken to date has been against ragwort (Jacobaea vulgaris, previously Senecio jacobaea). Biocontrol uses the natural enemies of weeds to tame them to the point where no other control is needed. The ragwort flea beetle (Longitarsus jacobaeae) has reduced ragwort to low levels in many parts of New Zealand. More recently efforts have been made to release a plume moth (Platyptilia isodactila) in the remaining ragwort strangleholds where the flea beetle is not able to be effective, and it looks likely to be successful. Since the early 1990s, for a total cost of just under $1.5 million, the ragwort biocontrol programme has saved New Zealand dairy farms between $9 and $12 million every year (1).

Farmers and regional and local councils expend significant resources eradicating or managing the spread of weeds. Five hundred species are currently considered weeds in New Zealand, having impacts or potential impacts on the environment, the productivity of our agricultural, horticultural and forestry industries, and on social/public health issues. Invasive species, including weeds, are acknowledged as the second most important reason for biodiversity loss, after loss of habitat, and they have significant costs for agriculture, horticulture and forestry. Recent studies estimate that pastoral weeds may be responsible for costs of $1.2 billion per year in New Zealand, approximately half in crop losses, and half in control costs (Bourdot 2007; Kaye-Blake & Bhubaneswor 2008). These weed costs equal 12% of the $10 billion per year revenues for the pastoral sector.

A study into the possible economic benefits of undertaking biocontrol for broom (Cytisus scoparius) (Jarvis et al. 2006) found that if broom was only reduced by 25% the benefits of the programme still outweighed the costs (resulting in savings of $0.573 million net annually). A 95% reduction of broom, though less likely, would result in $10.135 million net annually. A figure that takes into account varying levels of broom control in different areas, which is more likely, shows a net annual benefit to New Zealand of $3.761 million.

Total cost to date of the broom biocontrol programmes is estimated to be $2.72 million, to gain a probable net benefit to New Zealand of $37.61 million over 10 years. Three broom biocontrol agents - the twig miner (Leucoptera spartifoliella), seed beetle (Bruchidius villosus), and psyllid (Arytainilla spartiophila) - are well established now in New Zealand. Three additional agents - a leaf beetle (Gonioctena olivacea), shoot moth (Agonopterix assimilella) and a gall mite (Aceria genistae) - are currently being released. Ecological and modelling studies suggest that this combined attack is likely to be able to beat broom in the longer term.

As well as new weeds appearing, many well-known weeds will spread, resulting in high costs to biodiversity and increased costs for control. For example, without the three new biocontrol agents above, broom is likely to invade above the treeline in the South Island, causing a serious loss of native subalpine plants and undesirably changing the landscape. Broom control alone currently costs the Department of Conservation more than $530,000 each year. The cost of broom to farming in New Zealand, for lost production and control, was recently estimated to be $8.4 million a year (Jarvis et al. 2006), and the costs of all weeds to the forest industry $90 million annually (2).

Biocontrol is cost effective — an Australian study (3) found that over 104 years biocontrol saved an annual average of $95.3 million, for an average annual investment of $4.3 million — a benefit-to-cost ratio of 23 to 1. Biocontrol is also the only sustainable way of managing widespread weeds, and in many cases is much less damaging to the environment than not controlling weeds at all or using conventional tools like herbicides. However, it is not a quick fix because it usually takes many years for suitable agents to be identified and approved for use in New Zealand (4), then reared, released and successfully established.

Case study: Tradescantia - A biocontrol solution is being prepared

Tradescantia also regenerates much more quickly than native seedlings. Chemical control is unsatisfactory in this environment because it harms or kills the seedlings, essential for long-term forest viability. Manual control can be used but is not practical for large areas of tradescantia, and must be repeated often as the plant quickly regrows from any small fragments. Disposal of removed plant material in a way that does not give rise to new infestations is also difficult as it remains viable for many months. Fortunately many promising biocontrol agents are available in the native range in SE Brazil, where the plant is noticeably less vigorous. Landcare Research, with support from the Department of Conservation and regional councils, is working to release three beetle species that attack the foliage (Neolema ogloblini), growing tips (Neolema abbreviata), and stems (Lema basicostata), in the near future. Together, these should provide good control of tradescantia, and as a back-up there are promising plant pathogens and other insect herbivores in Brazil if needed.

Landcare Research staff have, since the late 1980s, played an essential part in 10 biocontrol successes in New Zealand (footnote). Staff are internationally renowned for their skill, and their approach has allowed biocontrol agents to be established more quickly and successfully (5) in New Zealand than in any other country in the world, and has helped to ensure the continued support for biocontrol (Hayes 1999).

About $2 million is spent on weed biocontrol research in New Zealand annually with funding provided mainly by the National Weed Biocontrol Collective, the Ministry of Agriculture and Forestry's Sustainable Farming Fund, and the Foundation for Research, Science and Technology. Some biocontrol projects result in a far higher return on investment than others (6).

1. Average spend on ragwort control per dairy farm on the West Coast is $980 p.a.; there are 12,800 dairy-only farms in New Zealand. Total spend without biocontrol would equal $12.544 million. About 75% of those farms have had effective ragwort control through ragwort flea beetle for some years. In addition the 12 regional councils and mixed sheep and beef farms spend varying amounts on ragwort control. Biocontrol is not currently effective on the West Coast, in Southland and the wettest areas of the North Island, but should become effective in all areas over the next decade as the plume moth spreads over the wetter regions.

3. The Cooperative Research Centre for Australian Weed Management commissioned an economic impact assessment of weed biocontrol activity in Australia (Page & Lacey 2006). Over the past 104 years weed biocontrol has cost Australia on average $4.3 million per year and the annual return from this investment is estimated to be $95.3 million, a benefit-to-cost ratio of 23 to 1. For every $1 invested in biocontrol there has been a return of $17.40 to agriculture in saved control costs and increased production, $3.80 to the wider community primarily from health benefits, and $1.90 to the government also from saved control costs. No comparable study has been carried out for New Zealand.

4. A total of 48 species have been released in New Zealand as biocontrol agents for 16 weed targets: 35 have established, 6 have not, and for 5 it is too early to be sure.

6. The Australian study in (3) above found that the huge annual return was produced by only 14 out of 29 programmes. It also noted that environmental and social benefits can be hard to quantify. Unsuccessful biocontrol programmes cost $15 million, but this cost is insignificant compared with the benefits provided by successful ones. Even a small reduction in a major widespread weed, e.g. 5% of lantana (Lantana camara)[in Australia] and blackberry (Rubus fruticosis agg.), could more than pay for the cost of developing a biocontrol programme.