Innovative remote sensing work by Landcare Research scientists is providing a wealth of information for land management in New Zealand, as this 2007 case study for the Crown Company Monitoring Advisory Unit (CCMAU) explains. 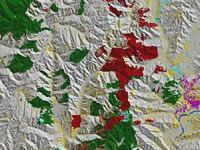 The standardisation of remotely sensed data is a critical and technically challenging step allowing data acquired under different conditions to be directly compared. These conditions include sun angle, viewing angle, atmospheric conditions, and most importantly, the slope and aspect of the terrain being sensed. Without methods to radiometrically correct for terrain, automated classification of ground cover based on spectral signatures is not practical for the hilly areas typical of large parts of New Zealand.

Our research to standardise optical satellite imagery began in 1996. One area of focus was the development, in partnership with regional councils, of EcoSat. EcoSat is a hierarchy of layers ranging from basic standardised satellite imagery, through to interpreted information such as a woody vegetation layer, land cover classes, and indigenous forest classes. EcoSat enables mapping of ecosystem attributes from satellite images. It provides current and cost-effective information about our ecosystems and is available at either regional or national coverage, as individual layers, or as a complete dataset.

Research on standardising imagery and the development of EcoSat has involved the equivalent of 1.5 scientists over the past 8 years, with funding from FRST, regional councils and MoRST capability funding.

The theoretical basis for the model that underpins EcoSat has been published in a number of journal articles (Dymond & Qi 1997; Dymond & Shepherd 1999, 2001; Shepherd & Dymond 2000, 2003). In addition to its use in EcoSat, this software has been extensively used in other major remote sensing applications to benefit New Zealand. Image standardisation was used to prepare data for LCDB-2 (a second version of NZ's land cover database) - an MfE-sponsored initiative, with wide-ranging application.

Using corrected imagery, areas of potential change from the LCDB-1 were able to be automatically identified, and ETM+ satellite imagery rather than SPOT satellite imagery could be used. This reduced both the size and cost of production of LCDB-2, resulting in cost savings of $450,0001- one-third of the project cost. Licences to use the LCDB-2 are available from MfE for a nominal cost. So far LCBD-2 has been licensed to government bodies including MAF, DOC, and Statistics NZ, all regional councils, most local body councils, universities, and other research organisations such as CRIs.

Landcare Research's image standardisation also underpins MfE's carbon accounting, both in the development of the ‘1990 baseline' from historical satellite imagery, and in reporting for future Kyoto Protocol commitment periods by enabling rapid assessment of landscape change.

After the February 2004 storm in the lower North Island, image standardisation of SPOT satellite data enabled rapid assessment of storm damage. In the Manawatu/Wanganui region, 62 000 landslides in the storm were mapped for the Ministry of Civil Defence and Emergency Management, and the results used to validate a region-wide model of landslide risk.

The EcoSat technology that developed from our earlier image standardisation research has been used by a wide variety of users, for cost-effective applications including:

EcoSat was used to define highly erodible land in the Manawatu-Wanganui region as part of Horizons Regional Council's $80m Sustainable Land Use Initiative (SLUI). Part of the value in EcoSat lies in the convenience of being able to quickly map large areas without physically accessing farms, and the ease with which priority areas for action can be identified. EcoSat mapping identified over 300 000 ha of highly erodible farmed hill country. The cost of effecting land use change over the entire area of highly erodible land to stem soil erosion is estimated at up to $45m2. However, EcoSat enabled identification of 70 000 ha of seriously eroding land, which the council is targeting for land-use change over the next 10 years. This will allow maximum benefits to be gained from $10.5m investment in soil conservation work - a potential cost saving of up to $35m.

Sources of information and assumptions

1 Estimate based on Landcare Research's comparative costing of projects for clients using EcoSat and alternative technologies.

2 Malcolm Todd, Horizons Regional Council (pers. comm.). Estimate based on cost of $1,500 per hectare to convert pasture to pine, while acknowledging that other land use.