NVS – improving understanding of what exists (and existed) and where

New Zealand has an incredibly diverse landscape spanning extensive forests and grasslands, alpine snowfields, and rugged seascapes. Component ecosystems comprise a wide range of vegetation types. Understanding exactly what we have and then collating the information into a centralised, secure, reliable and accessible data system is not always easy. 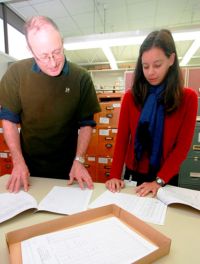 For over 50 years the New Zealand Forest Service, Department of Lands & Survey, and the DSIR Botany Division undertook vegetation surveys and established study plots to inventory and monitor a range of habitats, with special emphasis on grasslands and indigenous forests. Ongoing surveys and research by the Department of Conservation (DOC), regional councils, universities and Landcare Research continue to add data to this repository, which is now known as the National Vegetation Survey databank (NVS).

In the late 1980s the creation of the NIVS (National Indigenous Vegetation Survey) database formalised the process of obtaining and archiving electronic data, copies of original data sheets, maps, aerial and plot photos, ancillary information and reports at the Forest Research Institute in Christchurch.

The NIVS databases and staff associated with its development and maintenance transferred from FRI to Landcare Research when it was established in 1992, and in 1997 was renamed National Vegetation Survey (NVS) databank. NVS incorporated both the earlier NIVS and data from the earlier National Forest Surveys (NFS), North Island Forest Ecological Survey (Ecosurvey) and DOC’s Protected Natural Areas (PNA) Programme. The name change reflected the intention to encompass data spanning a broader range of vegetation types, where either indigenous or exotic plants dominate.

The NVS databank has two primary functions. The first is to serve as a national archive into which data can be deposited with confidence that future retrieval will be straightforward, and that, with provisos, these data may be made available to others. The second is to achieve as much consistency as possible in the manner in which data are stored and accessed to allow ready analysis of combined data sets that span space and time.

Information archived in NVS is vital to meet reporting requirements for the Convention on Biological Diversity, Framework Convention on Climate Change, Resource Management Act, State of Environment, and the Montreal Process and of government departments, such as DOC.

Furthermore, NVS provides the means to pool regional and national datasets with data from abroad to understand global issues. In the last year NVS assisted local researchers in a worldwide study that shattered a common assumption about how trees grow, finding that larger, older trees keep bulking up and can be "star players" at sucking carbon from the atmosphere.

This study, published in leading journal, Nature, found that trees' growth does not slow as they get older – as previously assumed – instead, it keeps accelerating. Because forests are major components of the global carbon cycle, the findings have big implications for our understanding of the role of trees in influencing greenhouse gas concentrations.

A team of 38 international researchers compiled the growth measurements of more than 673,000 trees belonging to 403 species in different temperature regions across six continents, including more than 45,000 trees across 22 species in New Zealand.

Dr Susan Wiser provided the New Zealand ecological perspective to the study and the NZ data were sourced from NVS. Dr Wiser and the NVS team at Landcare Research made a major effort to validate and correct the 45,418 records indicating size, growth and mortality of individual trees that contributed to these findings.

The results showed that for most tree species, mass growth rate increases continuously with tree size - in some cases, large trees appear to be adding the carbon mass equivalent of an entire smaller tree each year. As was seen in other parts of the world, more than 95 per cent of large old trees measured in New Zealand were found to have high increasing mass growth rates.

NVS was recently enhanced to support DOC’s National Biodiversity Monitoring and Reporting System. DOC’s system is designed to collect data that supports management operations and reporting, and to assess the state and trend of New Zealand’s biodiversity. For vegetation plot data, DOC has utilised the data collection and storage methods of the NVS platform because it provides a consistent and proven approach such data.

The key enhancements are the inclusion of additional data collection methods specific to DOC, improvements in data validation and support systems and for the first time the ability for DOC staff to enter data directly into the NVS databank from within the DOC network. This allows DOC to organise data entry teams to meet their needs rather than relying on the resources of Landcare Research alone.