The brushtail possum has wrought havoc in New Zealand since being introduced from Australia in 1837. As well as impacting native flora and fauna, possums are the main vectors of bovine tuberculosis (TB), a disease of cattle that historically affected many people, especially children who drank unpasteurised milk.

In the 1960s and 1970s, TB levels in livestock were greatly reduced but a reduction in the funding of possum control in the 1980s permitted a resurgence to about 1700 TB-infected cattle and deer herds in 1994. 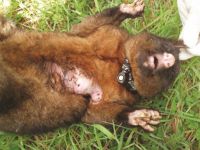 Landcare Research has been the lead science provider to TBFree New Zealand (formerly the Animal Health Board) in the battle to bring TB under control. There are now fewer than 100 TB-infected herds in New Zealand. Since 2011, TBFree New Zealand has declared almost 800,000ha of land free of the disease and is now on track to meet or exceed its medium-term goal of eradicating TB from livestock and wildlife from 2.5 million hectares of land by 2026.

Landcare Research’s role in that success has been recognised by The New Zealand Association of Scientists. Our team of five wildlife ecology and management scientists won the 2013 Shorland Medal for ‘major and continued contribution to basic or applied research that has added significantly to scientific understanding or resulted in significant benefits to society’.

The team’s research has clarified the role of the main host species (possums, ferrets, deer and pigs) as TB vectors and as threats to native biodiversity; helped develop new strategies for local elimination of pests and TB; helped substantially reduce the environmental, non-target, and animal welfare risks caused by pest management; and significantly increased the certainty of successful pest management.

Underpinning this are over 50 journal publications from the team since 2009, which are widely cited both nationally and internationally.

Over the past 20 years, much of the research has been funded by TBFree New Zealand and the Department of Conservation (DOC). Landcare Research has also committed public funding to important elements of this research. Two key examples are:

Landcare Research is now using TBFree New Zealand and public funding to support the development of a completely new approach to declaring areas free of TB. Whereas the approach used currently is based on conducting possum control for 10-15 years and then using surveillance to assess whether any TB is still present in the few remaining possums, the new approach would work in reverse. The concept involves implementing the surveillance phase far earlier in the process, and using the information about the presence or absence of TB and about possum densities to decide how much more control is needed. This has the potential to substantially reduce the time, effort, and cost required to be able to declare an area free of TB.

Our relationships with TBFree New Zealand and DOC are some of some of our strongest and most enduring working relationships. Some of the key personnel in each organisation have worked together for more than two decades.

Those relationships ensure close strategic alignment between our organisations. We understand, and are well positioned to respond to, the vertebrate pest research needs of TBFree New Zealand and DOC.

Landcare Research staff are also called upon to help develop high level policy, for example to participate in the revocation reviews for declaring areas free of TB, and to present research findings to regional operational staff at travelling roadshows.

New Zealand has an enviable reputation as a supplier of high quality dairy, beef and venison exports – collectively worth about $14 billion a year to our economy.

Possums, and to a lesser extend ferrets, are the main vectors of TB in New Zealand. In most years, over 70% of new herd infections in TB-risk areas can be traced back to infected possums. Keeping TB-infected possum populations under tight control is therefore crucial in preventing the type of spike in numbers of infected cattle and deer that occurred in the 1980s and early 1990s.

Writing in support of the Shorland Medal application, Paul Livingstone, Manager TB Eradication and Research at OSPRI (which manages the TB Free New Zealand programme) said the knowledge gained from the Landcare Research team’s work, along with their participation in strategic planning had “provided major contributions to the cost-effective control of TB-infected possum populations in New Zealand.”

He added that Landcare Research’s work had also been “instrumental in both designing and gaining stakeholder agreement on New Zealand’s current National Pest Management Plan for bovine TB (to eradicate TB from possum populations from a minimum of 2.5 million hectares by 2026).”

TBFree New Zealand’s success in managing the disease has come at a time when infection rates are increasing in many countries. In England alone, 28,000 cattle were slaughtered for TB control in 2012 (compared with <200 TB-infected cattle in New Zealand). In 2010 the economic cost of TB in England was estimated at more than NZ$170m.

In addition to economic benefits, there environmental and social gains from controlling TB. The environmental benefits extend to both flora and fauna. Selective browsing by possums has changed the structure and composition of native forests, and camera and video images have shown possums eating eggs, chicks and even the adults of native bird species. A psychiatric health test in England showed farmers who had experienced TB herd breakdown had significantly higher levels of stress than those who had not.

Our long-term possum and TB research is a good example of how customer-funded projects for TBFree New Zealand (with the goal of controlling TB) and DOC (with the goal of benefitting native biodiversity), supported by Landcare Research public funding, can achieve economic and environmental benefits that are greater than the sum of the separate elements.