Invasive weeds are a major biosecurity and biodiversity problem in New Zealand. Our productive and natural landscapes have been severely impacted by weeds that have rapidly become established.

Biodiversity and biosecurity professionals need to be able to quickly and accurately identify plants, and have convenient access to information about the status of plants that exist here. Often those decision makers have limited botanical qualifications, so those identification tools need to be easy to use. 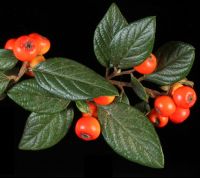 The ornamental shrub Cotoneaster is a good example of an introduced genus that regional council staff, horticulturists and other plant decision makers need to keep an eye on. Most of the 26 species that are known to be in New Zealand have originated from the Chinese Himalaya. Some species have been cultivated in nurseries and are common in gardens. Others have spread in the wild and have become troublesome weeds. One, Cotoneaster simonsii, is banned from sale.

Cotoneasters are frost-hardy, some will grow under native forest, and their seed is effectively spread by birds. Some species have become invasive weeds in forest and scrub, and they are common on roadsides, where they often spread on to adjacent productive farmland.

Although not currently a popular garden plant, Cotoneasters are very common in established gardens and they are notoriously difficult to remove. When properties in small rural communities are abandoned and the gardens are no longer managed, the plants can quickly spread to adjoining land. Cotoneasters also attract the attention of orchardists as they are a host for fire blight, a disease of pip fruit trees.

So how can a regional council weed manager, for example, quickly identify an unfamiliar invasive species that may be new to an area and should be quickly eradicated?

Landcare Research has recently produced an interactive online key to help people identify Cotoneaster varieties by their characteristics, such as flower size, shape and colour, and leaf and fruit appearances. Although the genus has a short flowering period, the distinctive fruit hangs on the shrub for a long time, aiding identification. The key has about 500 photographic images as some Cotoneaster varieties in New Zealand are separated by very small differences.

The Cotoneaster key is the eighth plant identification key we have produced since 2007 and the tools continue to grow in popularity. The other keys cover New Zealand flowering plant genera, coprosma, grasses, weeds, native orchids and weedy daisies of the South Pacific. Collectively the keys received more than 40,000 page views in the 12 months to 30 June 2014.

Built with users in mind

Keys are created in response to users’ needs. With the Cotoneaster key, existing information was out-of-date and the genus stood out as an expanding weed threat. Even very experienced botanists said they couldn’t identify some of the common species.

Our early interactive keys were developed and tested with selected users before being put online. New keys are now published online as soon as they are created and we invite feedback from the community of users about how they can be improved or expanded.

We provide regular training sessions for users of the interactive keys. In our early workshops we introduced people to the software and then taught them how to use the keys to identify plants.  Now users find operating the keys to be so intuitive that our workshops focus on teaching people how to look at the plants.

Each new key is promoted through the New Zealand Plant Conservation Network and Landcare Research’s communication channels, including our newsletter Plant Press.

Prior to the availability of the plant identification keys, most people wanting to identify and learn about plants had to use keys in technical science publications such as the Flora of New Zealand volumes that require training in botany to use.

With growth in the use of interactive online tools, most people now prefer the interactive keys. Landcare Research staff who have conducted training sessions have noted that people without botanical qualifications are reluctant to open a flora volume, but are completely comfortable with an interactive key. Another advantage of the keys is that their content can be updated regularly.