A Scottish tourist visiting Hanmer in spring was overheard marvelling at the hillsides smothered in the bright yellow flowers of Scotch broom (Cytisus scoparius). Broom is thriving in many parts of New Zealand in the absence of the more than 30 species that evolved over many years in Europe to feed on the shrub and keep it in check.

Broom is unpalatable to livestock, so dense infestations on New Zealand farmland are reducing stock carrying capacity. With its rapid growth it is smothering new tree plantings for forestry. The economic impact of broom to the forestry and farming sectors has been conservatively estimated at $100m per year in lost productivity and control costs. The weed is spreading alarmingly on marginal productive land where conventional control through spraying is not cost-effective. 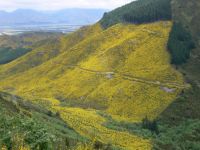 High-priority New Zealand conservation land is affected by broom as it out-competes threatened native plants. The weed is also invading braided riverbeds where it is destroying the open habitats for rare endemic birds and is providing cover for their introduced predators.

With mature plants producing up to 30,000 seeds per square metre, and a massive seed bank that can survive in soil for decades, the problem will only get worse. Broom currently occupies only about 20% of its potential range in this country and it can exist above the bushline. Our iconic tourism images of native bush-clad hillsides could be transformed in years to come.

Biocontrol – the only viable, long-term solution

For more than 30 years Landcare Research, and earlier the DSIR, have been combating broom through biocontrol – the use of one living organism (usually an insect or fungus) to control another. We have researched the appropriateness of importing agents that impact broom in its native range of Western Europe. All five agents recommended for release in New Zealand have been approved by the regulatory authority (currently the Environmental Protection Authority) and we have reared the agents for distribution.

While those release programmes, largely funded by the regional councils and the Ministry for Primary Industries and its predecessor entities have come to an end, the work doesn’t stop. We are now using Core funding to study the establishment and effectiveness of the agents, and we are striving to maximise their spread.

The first agent to attack broom, the broom twig miner (Leucoptera spartifoliella) is believed to have been accidentally introduced to New Zealand on ornamental broom plants from Europe prior to 1950. It has spread throughout the country and has a significant impact on broom in the spring, reducing flowering and growth. Unfortunately the plants usually recover over summer, especially when there is adequate rainfall.

The deliberately-released agents have been chosen to complement the work of the twig miner. The broom seed beetle (Bruchidius villosus), introduced by the DSIR in 1985 is now widespread and can destroy at least 80% of the seed crop. The sap-sucking broom psyllid (Arytainilla spartiophila) introduced in 1992, is now widespread but is struggling to have long-term impact, probably because of predation by other insects. 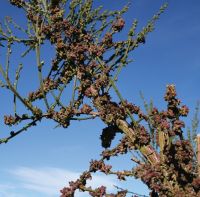 Three more recently-released agents are being closely monitored. The broom leaf beetle (Gonioctena olivacea), introduced in 2006, attacks leaves and stem tips and should work well in tandem with the twig miner. The broom shoot moth (Agonopterix assimilella), introduced in 2007, produces caterpillars that kill off stem tips. This moth could be effective in future as it can survive at altitude.

At the moment the most promising agent is the microscopic broom gall mite (Aceria genistae), introduced in 2008, which turns broom buds into deformed lumps. The mite has become well established at early release sites, stunting broom growth and even killing entire plants.

Landcare Research has partnered closely with all stakeholders, particularly the sector- or locality-based release groups driving each initiative, through the entire biocontrol process. This begins with early studies into the appropriateness of potential agents, the approved study of agents in strict quarantine conditions, through the regulatory release process and, with approval, the breeding and distribution programmes.

We then work closely with biosecurity officers at regional councils to maximise the prospects for the agents to become established. We produce fact sheets on each agent and hold workshops with interested parties. Our annual Biosecurity Bonanza seminar, where we update stakeholders on weed bio-control initiatives, always attracts more than 100 attendees.

The combined work of several agents

Outside of our most productive land environments, biocontrol is the only viable option for combating well-established weeds like broom. Given the already extensive distribution of the weed, and its likely further spread, it will take decades – if not longer – for the introduced agents to establish in sufficient numbers and locations to knock back the weed.

But the signs are promising, particularly with the dramatic impact of the broom gall mite. Realistically it will not be one agent that brings broom under control but the work of several agents attacking the shrub in different ways at different times of the year.

For proof that success is possible, and to evaluate the costs and benefits of weed biocontrol, it is useful to reflect on successful previous initiatives. Until a couple of decades ago, the weed ragwort (Jacobaea vulgaris) blotted our farming landscapes and cost the sector tens of millions of dollars per year in lost productivity and control costs.

The introduction of the ragwort ﬂea beetle (Longitarsus jacobaeae) effectively brought the weed under control in the mid-1990s, except in areas with high soil moisture, such as the West Coast where dairy farmers were spending an average of almost $1,000 per year on control. So we successfully researched and released an additional agent, the ragwort plume moth (Platyptilia isodactyla), which is now firmly established at 85% of release sites on the West Coast.