In land-use decision making the stakes are high. Consider hill country erosion, which has an annual cost of $100-150m per year through loss of soil and nutrients, lost production, and damage to homes, infrastructure and waterways. A single storm in the lower North Island in February 2004 caused more than 62,000 landslides and was estimated to have cost about $300m.

Horizons Regional Council, which has identified 200,000 hectares of land that is prone to moderate-to-severe erosion, is investing $30m in a long-term Sustainable Land Use Initiative (SLUI). Horizons, and other North Island regional authorities affected by erosion, want to ensure they are making the best decisions – for their ratepayers, the environment and the economy. Landowners want to be confident that potentially expensive changes in land-use and management will achieve the anticipated benefits. 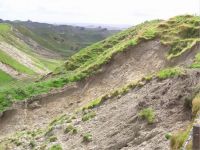 The modelling tools available in New Zealand all had limitations so Landcare Research sourced an Australian sediment model, called SedNet, and refined it to specifically address New Zealand’s erosion issues.

The model is based on a physical representation of hillslope and channel processes that contribute to each stream link in a river network. It accounts for losses in water bodies (reservoirs, lakes), and sediment deposits in water channels and on ﬂoodplains. Importantly, SedNetNZ simulates the processes that collectively account for the majority of erosion and sediment generation in the New Zealand landscape: sheet and rill erosion, landslides, earthﬂows, gullies, and bank erosion.

We partnered with Horizons to use the Manawatu River catchment as a case study for the model development. This catchment has major erosion and sedimentation issues, considerable existing erosion and sediment yield data, and with Horizons’ SLUI programme there was a high likelihood of major land management change that could be used to test the model.

Considerable effort went into characterising the erosion processes in the Manawatu catchment. This included the mapping of historical landslides, determining the relationships between landsliding probability and slope angle, as well as the mapping of earthﬂows and determining their contribution to the channel network.

To ensure SedNetNZ accurately simulated river sediment loads we were able to analyse suspended sediment data collected by Horizons at eight sites in the Manawatu catchment over the last ten years. Sediment yields ranged from 440 tonnes per square kilometre per year (t/km2/yr) in the Tiraumea River to 960 (t/km2/yr) in the Pohangina River.

We have continued to work with Horizons over its SLUI programme, both to track how existing initiatives are reducing sediment loads in the Manawatu catchment and to anticipate the effectiveness of planned developments. Recent research suggests the council is on track to reduce sediment levels by 40% by 2040.