Land-use intensification, particularly irrigated dairying, is occurring on stony soils. The most extensive dairy expansion on stony soils has been in Canterbury – 143,000 ha in 2012, with more areas converted since then. Of the 302,000 ha of irrigated land in Canterbury detected from analysis of satellite images collected from 2008 to early 2011, two-thirds are stony soils. The problem with stony soils is they have only a small amount of water storage compared to many other soils and pastures can rapidly dry out, leading to low productivity. Stones occupy space in the soil but they cannot store water. To compensate, stony pastoral soils require irrigation for intensive use.

The government has signalled $400 million of investment in irrigation to boost the economy, citing potential for an extra 420,000 ha of land across New Zealand to be irrigated by 2025. Much of the new irrigation will be in Canterbury, leading to further land-use intensification on stony soils.

However, the issue is wider than just Canterbury. Across the alluvial eastern plains of both the South and North Island of New Zealand, 1.68 million hectares of stony soils occur on land of <15° slope, for which there is potential for intensive irrigated land use.

Stony soils could be ‘leaky’ soils

Concerns exist about the ability of stony soils to sustain intensified land use, while maintaining nutrient leaching within discharge limits. Dairy shed effluent is usually ‘disposed of’ by irrigating it onto land so that soil microbes and pasture plants can benefit from the nutrients. Phosphate fertilisers, which naturally contain small amounts of cadmium, are also used to improve pasture production.

Environmental models consistently predict stony soils as having a high vulnerability to leaching under intensive land use so inappropriate effluent disposal on these soils could result in contamination of water bodies with nutrients and microbes (including Cryptosporidium, Campylobacter, toxigenic Escherichia coli and rotavirus). To date, there has been little research to validate model predictions.

Large, intact soil cores in barrel cases (lysimeters; 460 mm in diameter by 700 mm deep) were collected from three stony–sandy soils in the Canterbury region of New Zealand. The soils had either stones to the surface in a soil matrix of fines or 300–600 mm fines over stones. A further very stony soil with little fine soil material was also collected. These lysimeters were used to study the preferential leaching of nitrogen (N), phosphorus (P), and microbial contaminants under simulated intensive dairy farming. Cadmium (Cd) leaching was tested for only one soil type (the stony sand soil). This is the first time that such research data has been generated for these soil types.

For some of the lysimeters, dairy shed effluent was applied in a pulse (25 mm depth) followed by continuous artificial rainfall – both applied at 5 mm/hour. Other lysimeters were used to simulate the effects of periodic irrigation (12–18 mm depth applied every 3–4 days) on sequential treatments of superphosphate, cow urine and dairy shed effluent, with set drainage intervals between each treatment.

The leachate was analysed for N, P, Cd and Escherichia coli microbes. While E.coli is found in the lower gut of almost all warm-blooded animals, contaminated water can cause diarrhoea-type illnesses that are of concern, especially in humans.

The study revealed a high potential risk for E. coli to leach through the very stony soil with no fines, but a low potential risk for other soils analysed. The very stony soil also showed rapid leaching of N, P and Cd. Subsequent tests of very stony soil under simulated periodic irrigation showed this induced significant leaching of N, P and Cd – particularly with the addition of urine. These results indicated that the soils are very sensitive to application depth and rate of application of dairy shed effluent and irrigation.

The soils with fines were then tested for E. coli leaching under simulated intensive stocking, by artificially hoof pugging using a mechanical hoof. Pugging increased leaching of E.coli in the soil with stones to the surface.

These results imply that, for very stony soils and soils where stones are close to the surface (especially where the soil matrix is sandy), shallow groundwater is vulnerable to contamination under some land management practices. These soils have low water holding capacity so rainfall or irrigation could induce contaminants to move quickly down through the soil profile.

This vulnerability to leaching may make it difficult for land owners of intensive farming systems to meet water quality objectives arising from the 2011 National Policy Statement on Freshwater Management and revised/proposed regional council plans. 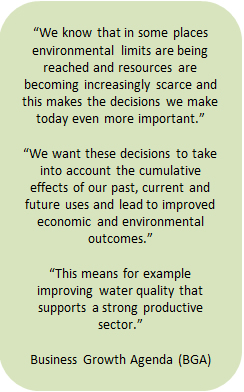 While irrigated stony soils have been a hotspot of land-use change and intensification over the past decade, this research highlights the poor environmental performance of soils with low natural capital (e.g. top soil depth and fertility, water holding capacity, and ability to treat contaminants). Irrigation under some conditions will lead to a high risk of nutrient leaching. There is a need to focus on developing targeted management practices to reduce leaching losses on stony soils. For example, stony soils are best managed with shallow depth irrigations that retain the irrigation water within the soil profile. Furthermore, stocking following irrigation or rainfall should be avoided as there is increased potential for the topsoil to become pugged.

AgResearch had used the results from earlier microbial leaching research, published in an international peer-reviewed paper1, in developing their dairy effluent application risk calculator. For stony soils, there was a knowledge gap so information was largely based on expert opinion. This latest research2 provides the evidence confirming these expert opinions were indeed correct. This tool is widely used for consent and design of farm dairy effluent disposal systems.

Results have been presented to industry stakeholders and others researching agricultural systems. Peer reviewed scientific papers were presented to the Fertiliser and Lime Research Centre 20133 and 20144 annual conferences (these are important knowledge transfer events), NZ Microbiological Society Conference, and NZ Journal of Agricultural Research. 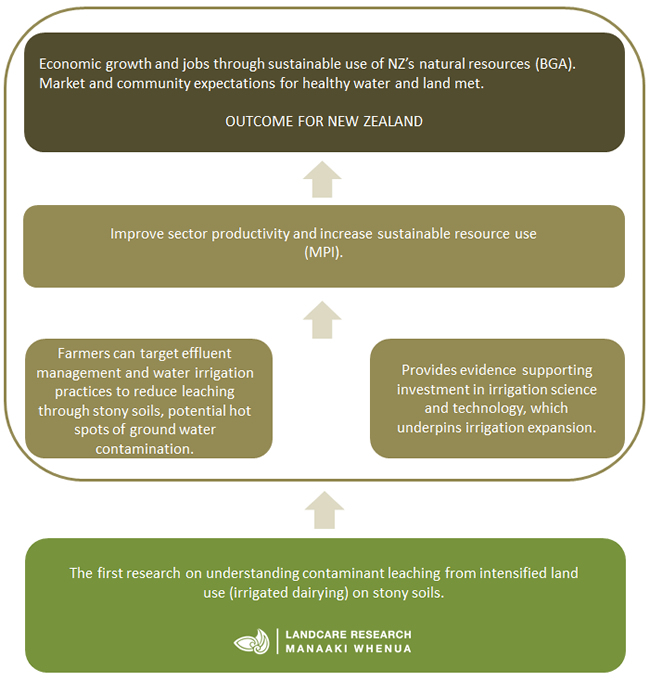