'Hotspots' of endemism (biodiversity found only in NZ)

Captain Cook’s first (1769) and second (1773-74) voyages to New Zealand produced the first scientific collections of New Zealand native plants, collected by expedition botanists who preserved specimens for the British Museum1. Subsequent explorers and ‘scientist-settlers’ collected more specimens from across New Zealand, with information about locality, date, taxa and other interesting details recorded on labels and in diaries. These early botanical collections now reside in New Zealand and offshore herbaria alongside more modern collections, with well over one million specimens of native flowering plants, ferns, conifers and cryptogams having been collected from New Zealand. Many of these specimens are truly unique to New Zealand, i.e. they are endemic species occurring nowhere but here (82% of our native plant species are endemic).

Since those early records, information on our native and endemic plants and where they grow has gradually increased. The accumulating information reveals that some localities have many endemic species or unique combinations of species.

The rapidly accumulating availability of electronic geo-referenced spatial records for herbaria around the world has led to international efforts to develop new statistically robust biodiversity analyses and reporting tools, such as Biodiverse. Biodiverse was developed specifically for spatial analyses of diversity using indices based on taxonomic, phylogenetic, trait and matrix-based (e.g. genetic distance) relationships, as well as related environmental and temporal variations. In a ‘proof-of-concept’ project, we assessed whether the free Biodiverse software and digitised herbarium records could be used to identify important areas of endemism for conservation prioritisation, planning and management and environmental reporting.

We used georeferenced spatial data covering the entire indigenous vascular flora ‒ the taxonomically diverse fern, conifer and flowering plant genera and species. The entire New Zealand archipelago of over 700 islands ‒ the mainland islands, inshore islands and the more distant offshore islands, such as the northern-most Kermadec and Three Kings Islands, the mid-latitude Chatham Islands, and the Sub Antarctic islands ‒ was included in the project.

We also developed a DNA phylogeny showing relationships of all of the New Zealand genera of ferns, conifers and flowering plants to enable phylogenetic (evolutionary ‘relatedness’) metrics to be analysed in conjunction with the spatial data. Undertaking spatial and phylogenetic analyses for the entire flora of an archipelago is unique; most previous studies have focused on genera and families that occur on continents.

The results of where the endemism occurs are broadly consistent with earlier studies but are more accurate and detailed.

Maps highlighting the areas and types of endemism have been generated from the analyses (see graphs).

Significance of the results

This study has successfully used a range of spatial biodiversity metrics for the entire vascular flora of the New Zealand archipelago. It has revealed new centres of endemism and confirmed previously identified ‘hotspots’, but with more accuracy than before. Furthermore, it is the first qualitative assessment of the type of endemism.

This research will contribute significantly to future regional and national scales of conservation as many areas and types of endemism are often poorly protected in the Department of Conservation (DOC) estate. For example:

This means we have not been very successful in protecting some of the most important areas that contain the ‘evolutionary potential’ for the New Zealand flora. Many of the areas of endemism that occur in lowland and coastal areas are not adequately protected. The centres and types of endemism identified urgently need to be considered in conservation policy, planning and management.

The new range of metrics will enable scientifically sound decisions for using limited conservation resources to target the most important areas. At the national scale, organisations such as DOC, QEII National Trust and the Nature Heritage Fund should be able to use our data for conservation planning and prioritisation to ensure that the most valuable areas of New Zealand biodiversity are protected and managed in perpetuity.

The Ministry for the Environment (MfE) has expressed a strong interest in using the metrics on endemism for biodiversity reporting because they are statistically robust, can be applied locally and nationally and resolved to different spatial scales, and enable trends to be reported. MfE recognises the value of the genetic metrics in biodiversity reporting, and has commissioned DNA sequencing to ensure the DNA phylogeny is based entirely on sequences from New Zealand species.

DOC and QEII National Trust have expressed an interest in the metrics for the identification of significant natural areas and for spatial prioritisation of threatened ecosystems for conservation.

Data was derived from the New Zealand Virtual Herbarium (NZVH), a collaborative initiative supported by ten herbaria with significant collections of indigenous plants. Landcare Research’s Allan Herbarium is a significant contributor to NZVH, and is primarily supported by Core funding. 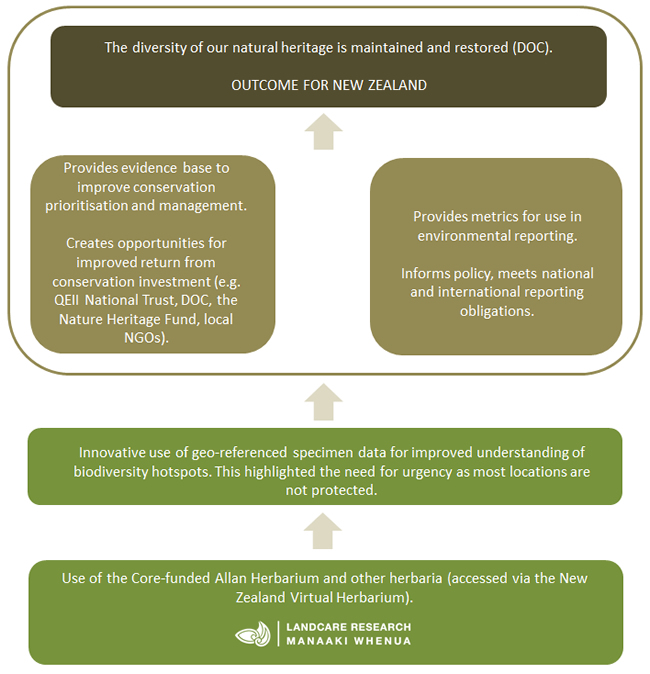 1Some of these specimens have been gifted back to New Zealand and are now housed in Landcare Research’s Allan Herbarium at Lincoln.