The vast continent of Antarctica is a natural reserve devoted to peace and science that is protected by an international agreement, the Antarctic Treaty. This Treaty, the continent’s isolation, and extreme climate have preserved its environments from exploitation and development. Yet Antarctica’s ‘pristine’ environmental values are under threat. For example, parts of Antarctica are experiencing rapid change as a result of changing climate conditions, and changes are being observed in the extent and distribution of Antarctica's native biodiversity. Non-native species have also established and human pressures, through tourism and governmental activities, are increasing. If such changes continue, they could potentially bring the effectiveness of the Antarctic Treaty System into question.

A pressing need for reliable, up-to-date information on Antarctic environments

To fulfil their mandates, CEP and the Antarctic Treaty countries urgently need independent, relevant and up-to-date scientific advice on the increasingly dynamic Antarctic environments and human activities in those environments. The Antarctic Environments Portal has been developed by both Antarctica New Zealand and Landcare Research to ensure the best available science knowledge is at the fingertips of Antarctic policy makers.
This project demonstrated Landcare Research’s globally leading informatics research, as well as our national leadership in managing and presenting research data in ways that support policy applications. It also built on our global leadership in geospatial mapping of the Antarctic continent, using remote sensing and other scientific techniques.

The open access Antarctic Environments Portal is an online source of high quality, unbiased, apolitical information presented in a synthesised form so that it is policy-ready and focused on CEP’s priority issues. The Portal aligns with the SCAR Science Horizon Scan initiative and the emerging SCAR Antarctic Conservation Strategy. The bulk of the content comprises short state-of-knowledge summaries with links to other useful resources. There is a rigorous editorial process (with both science and policy perspectives represented on the Editorial Group) and regular review of all material published. The Portal is available in the four official languages of the Antarctic Treaty ‒ English, French, Spanish and Russian.

Information is freely available to the public, educators and the media, and hence should help foster a greater general understanding of the complexities of managing Antarctica.

Landcare Research and our collaborating partners have developed a suite of performance measures for the Portal, including web statistics, references to the Portal in papers submitted to Treaty meetings, and the extent to which formal decisions taken at ATCMs can be linked to information provided through the Portal.

Concepts, objectives and progress with the Portal were well publicised at annual CEP meetings and the 2014 SCAR Open Science Conference; both policy and science communities consistently voiced strong support. At the 2015 ATCP and CEP meeting in Bulgaria1, Treaty Parties again expressed their support for the Portal, and formally adopted a resolution for its use.

Importance of the Portal

Equitable access to information: The Portal provides the first centralised repository for the current information on Antarctic environments, supporting a common understanding of issues, strategic planning and prioritisation of effort. Previously, Treaty Consultative Parties did not have equal access to scientific information making it more difficult for smaller, less well-resourced Parties to participate in policy and management debates.

Driving priorities: Researchers can post information on emerging environmental issues, which may not otherwise reach the attention of the Parties. Absence of information in the Portal will highlight where more research is needed, and so help governments prioritise multi-million dollar Antarctic science budgets.

Underlining the importance of New Zealand’s role: The support shown by the Parties at the 2015 meeting underlines the important role that New Zealand plays in environmental protection of Antarctica.

Supporting a more agile, well-informed Antarctic Treaty System: Ultimately, the Portal will support the Treaty Consultative Parties in discharging their responsibilities for ensuring the intrinsic values of Antarctica are maintained for future generations and that the continent continues as a natural reserve devoted to peace and science. 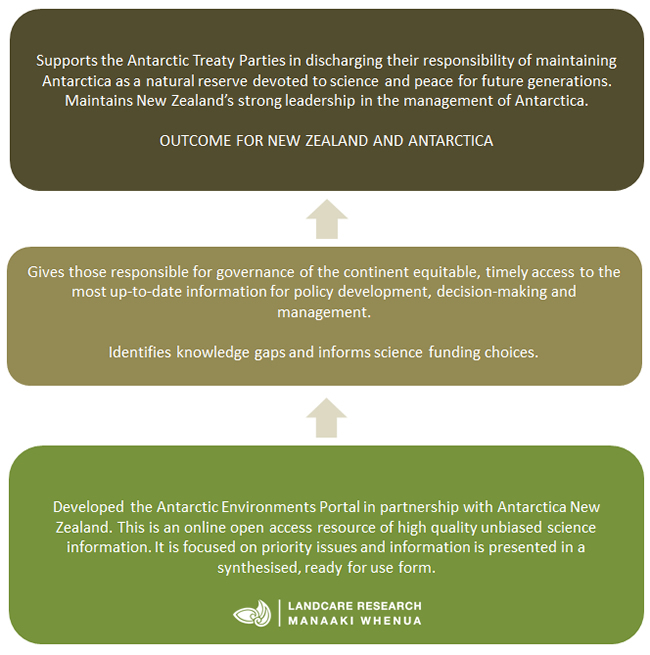 1Antarctic Treaty Consultative Meetings are hosted in turn by all of the Consultative Parties in alphabetical order – the next meeting in 2016 is in Chile.