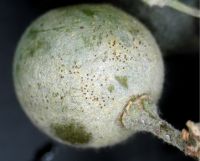 Sexual fruiting bodies of the grape powdery mildew fungus associated with the hyphal mat on the surface of a grape.

Powdery mildew (Erysiphe necator) is a major disease of grapes in New Zealand. Its origins can be traced back to wild grape vine relatives in the USA. The asexual form of the fungus that causes the disease has been in New Zealand for more than 100 years. However, in 2013/2014, the sexual stage was found for the first time in Hawke’s Bay. While it is possible that it has been here a long time without being noticed, it is far more likely to be a recent incursion.

Landcare Research is custodian of the Core-funded New Zealand Fungal Herbarium and the International Collection of Microorganisms from Plants. Our considerable expertise in systematics and plant pathology is supported by genomics capability ‒ and hence we were asked to confirm the identity of the pathogen when the diseased grapes were first found. We confirmed the sexual form of powdery mildew.

Having both sexual and asexual spores means there is greater opportunity for the fungus to infect its host. The first observations of the sexual state coincided with a season in which control of the disease proved particularly difficult. It is not known whether this was caused by the sexual form or merely coincidental, but research overseas has shown that sexual populations of this fungus tend to be more pathogenic and more prone to developing fungicide resistance. In New Zealand, growers have noted that the disease appears to be increasing in prevalence and severity.

Samples of grape powdery mildew for the 2015 season were collected from Hawke´s Bay, Nelson, Marlborough, Canterbury, Otago and Auckland. Using these, we conducted a preliminary genetic characterisation of the powdery mildew fungus to understand the relationship between disease severity and presence of sexual populations. Preliminary results indicate that there are three genetically distinct populations in New Zealand, with one of these populations consistently associated with difficult-to-control outbreaks of powdery mildew disease. Having identified the unique genetic markers of this population, we can work with our Plant & Food Research partners and the grape industry to monitor its distribution and spread and gain a much more accurate understanding of the practical impact of the sexual stage on disease incidence and control.

These initial data are being used in planning a wider programme to test whether there is a consistent relationship between genetic type and disease incidence and to determine the geographic distribution of the different genotypes.

Significance for the viticulture and wine industries 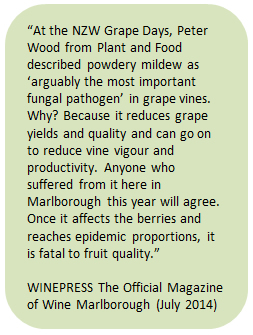 The wine industry is a significant part of the economy with a direct contribution to GDP of around $700 million annually. New Zealand Winegrowers estimate vineyard plantings are worth $5billion, supporting $1.33 billion in wine exports with continued growth expected. Globally, the wine trade is highly competitive but New Zealand is renowned for its exceptional wines and commitment to sustainable practices. Hence, a more virulent form of powdery mildew disease would be of extreme concern to the industry.

Working together for solutions

Researchers are working closely with grape growers and the wine industry to keep them informed and to find solutions. Our work and our results were discussed at a recent wine industry workshop on powdery mildew, organised by Plant & Food Research. The genetics of powdery mildew disease is a foundation part of a wider research initiative that is investigating fungicide resistance, fungicide application technologies, vine management and other aspects of viticulture relevant to future management or control of the disease. 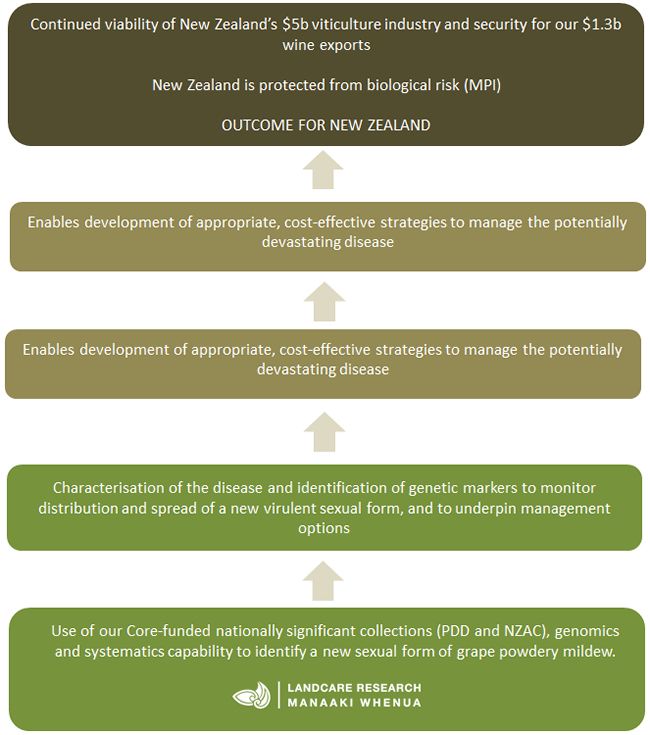