‘Mega-masts’, climate-change and the management of invasive mammals 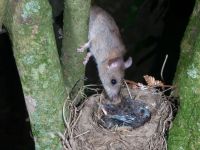 Many New Zealand plants sporadically have years with very high seed production (called masts).  During mast years in beech forests, populations of invasive rodents increase significantly, which leads to a build-up in populations of stoats. Much higher numbers of rodents and stoats increases predation on indigenous species. Elevated levels of predation further threaten the survival of some endangered species found only in scattered remnant populations. For example, outbreaks of ship rats severely impact orange-fronted parakeets and native bats; and local populations of mōhua in the South Island are unlikely to persist through periodic irruptions of stoats.

Currently the solution to managing mast-generated outbreaks of invasive species is pre-emptive control ‒ usually with aerially-sown 1080 baits distributed over large areas of forest. 1080 operations are effective but baiting large areas of forest is costly so conservation managers need to know where operations are most needed and where they would be most effective. In beech forest, flowering occurs a year in advance of seed production so pest control planning for a mast event can get under way well in advance. In principle, there is ample time to check on how the seed crop is developing and the abundance of rodents. However, in practice, this sort of monitoring has only been feasible at a few locations such as high-priority conservation areas with vulnerable species. Until recently there were no easy, affordable methods for estimating the spatial extent of a beech mast and therefore the appropriate size of pest control operations.

A model that accurately predicts mast years and pest outbreaks

Collaborative research with the University of Canterbury in 2013 showed how readily available climate data can be used to predict masts in several species, including beech and tussocks. According to this ‘delta T’ (ΔT) model, the likelihood of masts is positively correlated with the difference between average summer temperatures in successive years. (If the last summer was warmer than the preceding summer, there is a higher likelihood of a mast in the coming year.) Follow-up research showed that ΔT can predict directly the probability of outbreaks of house mice after beech masts.

The value of these forecasts for planning pest control became apparent immediately with the prediction in 2013 that 90% of beech forest was likely to mast in 2014: a ‘mega-mast’ year (Fig. 1).  [The ΔT forecast for 2015 was a low probability of masts in beech forest, but for 2016 there is a relatively high probability of beech masts in some areas, for example around Nelson lakes and in parts of Fiordland.] 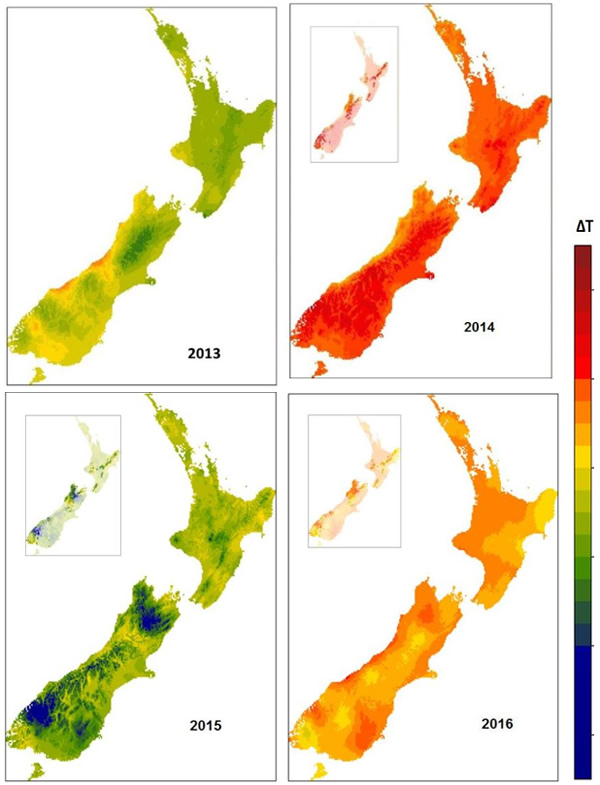 Rat predation of a nestling (Photo: Ngā Manu) DOC used the ΔT forecast of a mega-mast in 2014 to support a massive boost in pest control in its ‘Battle for our Birds’ campaign.  Funds for pest control were immediately boosted to $12 million and the campaign will cost approximately $21 million over 5 years.  This enabled DOC to target the areas with the most ‘at risk’ endangered bird populations. Although this is a large one-off sum, it would have cost DOC approximately $68 million (based on 2003‒2013 data) to conduct aerial 1080 baiting over the entire 3.8 million ha of beech forest predicted to mast in 2014.

Future developments to protect other ecosystems

In future developments, we will continue to work closely with DOC to extend the forecasts to other ecosystems such as alpine grasslands where masts by native tussock species induce outbreaks of house mice. High mouse populations lead to increased abundance of stoats and subsequent high risk of predation on vulnerable indigenous species such as the rock wren.

As part of an MBIE-funded project investigating the impacts and implications of climate change for New Zealand, we used the ΔT model to consider the following:

The model predicts that in some areas (e.g. on the South Island’s West Coast), beech forest is likely to mast once every 3 years. By comparison beech masts occur once every 5.4 years on average at the five sites used in the original ΔT model. The ability of beech forest to mast more frequently needs to be verified with field data. This information is critical because our research has shown that more frequent beech masts will lead to chronic pest damage and will compromise the ability of control programmes to suppress invasive mammals.

Retrospective ΔT modelling shows that, over the last 40 years, most masts are localised. Widespread ‘mega-masts’ were predicted on 11 occasions but not always in the same areas.

Using climate data provided by NIWA and four standard projections of possible future climate change, we also predicted future mega-masts using ΔT values up until 2100. Although there are some differences between the four scenarios, modelling to date indicates that mega-masts will continue to occur sporadically and at close to historic levels.

The investment in this work has comprised $50k of core funding pa over a 3 year period (funded via the IMI programme which receives a total of $978k pa), together with further co-funding of $50k pa from the New Zealand Climate Changes, Impacts and Implications project. 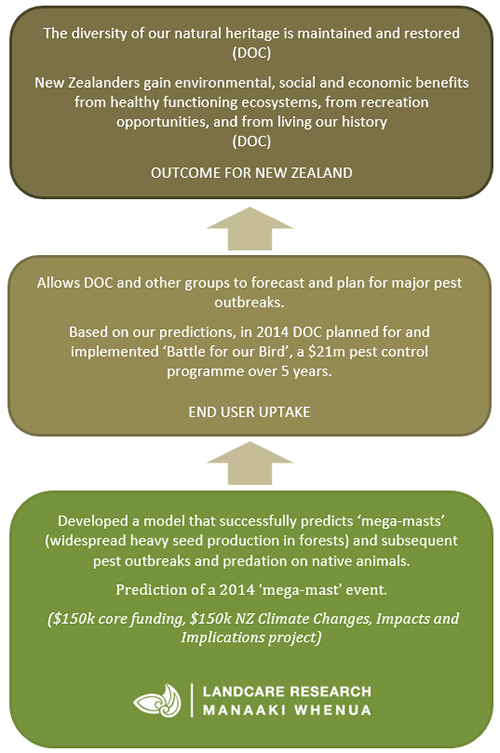